A planet with “titanium” clouds was discovered 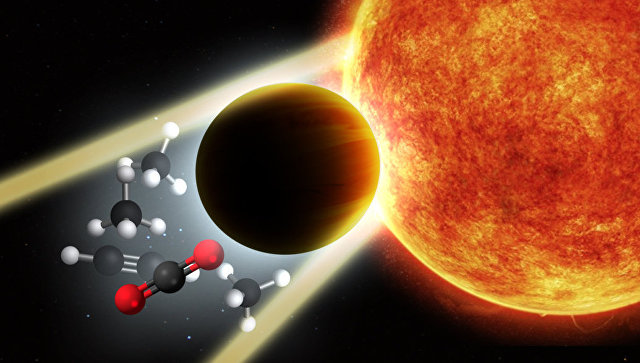 European astronomers have discovered a very unusual exoplanet, in whose atmosphere hang clouds of titanium oxide – the strongest greenhouse “gas”, capable of warming its upper layers to hell high temperatures.

“The presence of titanium oxide in the atmosphere of WASP-19b can have an extremely unusual effect on how its different layers are heated and how the air flows in it.The fact that we managed to study it in such detail makes us very happy and says that we can conduct similar observations for other planets, “said Ryan MacDonald of Cambridge University (UK).

“Hot Jupiters” astronomers call hot gas giants, which are only 2.2 to 75 million kilometers away from their stars. In the solar system, even Mercury approaches the star no closer than 46 million kilometers, and therefore in the atmospheres of such planets reign truly hellish temperatures – at 1000-1300 degrees Kelvin.

Finding such planets is much easier than other celestial bodies, and they make up most of the exoplanets known to science. The discovery of “hot Jupiters” for the first time put scientists ahead of the fact that the atmosphere on such planets can consist of extremely exotic materials. For example, in recent years, there have been discovered planets with lead and glass clouds, as well as air consisting of evaporated metals and rocks, in the upper layers of which sometimes rain from rubies and sapphires.

Relatively recently, as McDonald tells us, scientists discovered several “hot Jupiters” whose atmospheres were heated to even higher temperatures, exceeding 2,500 degrees Kelvin, and had an unusual structure – they were hotter outside and colder from the inside, like the Earth’s stratosphere. The presence of such a layer on them led scientists to assume that the atmosphere of these “hot Jupiters” is warming up some kind of superpowerful greenhouse effect, which can generate two substances – titanium oxide or vanadium oxide.

McDonald and his colleagues proved that this is actually the case when studying the spectrum of the planet WASP-19b, discovered four years ago in the constellation of Sail by a luminous body similar in size and mass to the Sun. This planet makes one turn around its star in just 18 hours, which allows scientists to observe every day how the rays of the luminary pass through its atmosphere and interact with its molecules, taking with them information about its chemical composition.

Tracing several dozen times for how the light of the star “flushes” the atmosphere of WASP-19b, planetologists were able to separate the real signals from noise and reveal its chemical composition. It turned out that this “hot Jupiter” was an extremely exotic and hot planet.

His atmosphere, as shown by scientists, consists of hot water vapor, sodium, helium and hydrogen, and its upper layers cover the layers of hydrocarbon fog and “titanium” clouds. Thanks to this “stratosphere” WASP-19b is heated up to two thousand degrees Kelvin, which makes it one of the most hot “hot Jupiters” known to astronomers.

Such a discovery, as McDonald and his colleagues emphasize, is important from the point of view that it demonstrates that scientists can disclose the exact chemical composition of distant planets using terrestrial telescopes. In turn, the launch of the James Webb space telescope will allow similar observations of smaller and hoter planets, more interesting from the point of view of the search for a potential homeland of extraterrestrial life, scientists conclude.