A rare photograph of the sun without spots 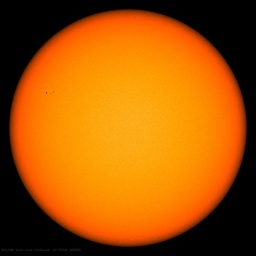 People who risk taking a look at the Sun without special protection are likely to see a single-color light spot. But in fact it’s just an optical illusion, and the surface of the star is usually dotted with dark spots generated by magnetic activity. But NASA specialists managed to capture the “clean” Sun in the last two weeks.

The lines of the magnetic field of the Sun emerge from the plasma body of the star in the form of beams through holes called pores. When the pores pass too close together, they compress the plasma in a portion between them and form spots colder relative to the overall surface temperature of the star at 3500 ° C versus the conventional 5500 ° C. Intensive radiation flashes, called solar flares, escape from these formations and propagate through the system, sometimes causing serious damage to terrestrial electronics, both orbital and planetary.

Since 1948, daily monitoring of sunspots has been carried out, and all these data indicate that the frequency of their occurrence increases and decreases periodically, in the 11-year cycle. Other types of solar activity can also affect the Earth, but sunspots regularly serve as an index for estimating the intensity of space weather.

The photo (above) was made in the Solar Dynamics Observatory (SDO), and it clearly shows that now the Sun is unusually smooth and clean. According to NASA, SDO fixed a similar star texture for 15 days, starting on March 7, which is the longest period of “impeccable cleanliness” since 2010. The image on the left for comparison shows the activity of sunspots from the last “solar maximum”, i.e., the extreme period at one end of the solar cycle. The peak activity of the last cycle was observed in the spring of 2014. The Sun has not yet reached the minimum, but on the basis of the 11-year chart, it can be predicted that this will happen approximately in 2019 or 2020. NASA scientists say that the last two weeks show the normalization of the activity of the Sun, as they expected.

Normal solar activity is very good. It is worth remembering the story: for the period from 1645 to 1715, when the activity of the star was minimized, the “small ice age” characterized by a global cooling occurred. So the polar whirlwind, which caused severe colds in the US and Europe, is far from the worst prospect.