A small meteoroid left a bright trace over Europe 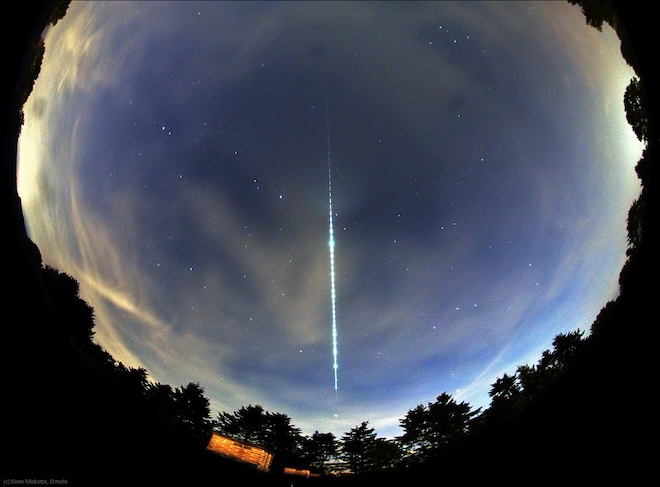 Last month, September 21, at 19:00 GMT in the skies over the Netherlands and Belgium, a flying fireball was seen. As it turned out, it was a meteoroid measuring just a few centimeters, which burned, hitting the Earth’s atmosphere.

reference
A meteoroid is a solid celestial body measuring from 10 μm to 1 m, which is larger than cosmic dust, but smaller than an asteroid.

The fireball was recorded by nearby stations of the Netherlands-Belgian meteor network operated by amateur astronomers from the Dutch Meteorite Society and the Meteorite Section of the Royal Netherlands Association for Meteorology and Astronomy. They use automatic cameras with optical lenses to photograph the night sky on clear nights.

This magnificent image was received by one of the stations in Ermelo (the Netherlands), run by Cohen Miskotte. The picture was taken with a shutter speed of 1.5 minutes using a fisheye lens. The camera lens was equipped with a shutter, which during the exposure makes short “pauses” at a rate of 14 per second. Because of these dark spaces, the meteorite tail looks “dotted”. Since the shutter speed is known, you can count the number of “dashes” and find out the duration of the fireball flight: 5.3 seconds.

You can also get information about the meteoroid slowdown in the atmosphere. In this case, the object hit the atmosphere at a speed of 31 km / s and slowed to 23 km / s by the time it completely burned at an altitude of 53 km.

A bright trace just below the top of the fireball is the star Arcturus. The Big Dipper can be seen on the right above the tree line. Another bright star in the center of the frame is slightly to the left of the path of the fireball – Vega.