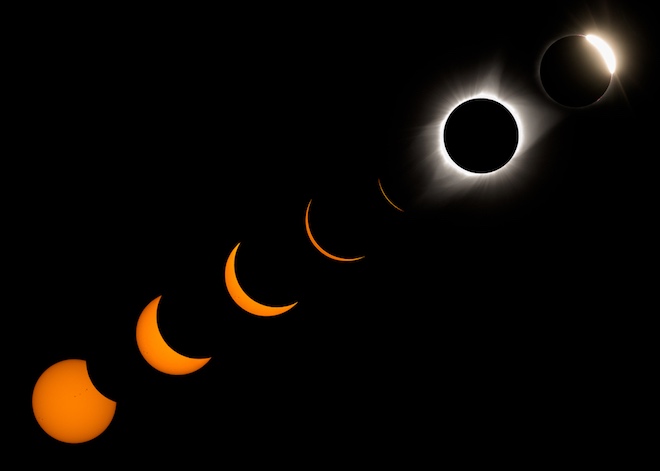 Like a boat floating on the water, the moon’s shadow created waves in the upper layers of the earth’s atmosphere during a historic total solar eclipse that took place on the continental US on August 21.

A total solar eclipse occurs on Earth every year or two, but it was the first eclipse in a century that crossed the country from coast to coast.

Dozens of professional observers and amateurs have pre-configured their instruments in the hope of learning one of the many amazing phenomena that can be seen only during a solar eclipse. Researchers from the Haystack Observatory of the Massachusetts Institute of Technology and the University of Tromsø in Norway also hoped to find evidence of this phenomenon, called the head shock wave.

The theory of the head shock wave, called by analogy with the V-shaped ripple that emanates from the bow of the ship while moving through the water, suggests that a total solar eclipse creates pockets of air with high pressure under the shadow of the Moon, which then crosses low-pressure air throughout the planet . These air pockets, in turn, should create small, but accessible for detection, head shock waves in the atmosphere.

The theory originated in the 1970s, but has not yet been documented. Thanks to the eclipse of 2017, the researchers received the first unambiguous evidence of weak waves.

During the August eclipse, the team collected data from about 2,000 satellites located throughout North America. As a result, they discovered tiny waves in the Earth’s ionosphere. This upper region of the atmosphere begins 60 km above the surface. The atoms in it are electrically charged due to solar and cosmic radiation.

“Although the effects of eclipses on the upper atmosphere have been studied for several decades, it was the first time an unprecedented satellite coverage has helped to capture the amazing details of ionospheric waves,” said lead author Shun-Rong Zhang of the Massachusetts Institute of Technology.

“A new study indicates that only certain types of ionospheric waves are associated with an eclipse. To quantify our observations, more complicated modeling work is required, “the expert added.

Charged particles in the ionosphere reflect radio waves, supporting our communication systems. But, according to Zhang, the headwaves from the eclipse were not so intense as to affect these systems or the electrical network.

According to the authors, the importance of the study lies in the discovery of complex relationships between the Sun, the Moon, the neutral atmosphere of the Earth and the ionosphere, which are yet to be understood.

Scientists hope to confirm the discovery and continue to unravel the secrets of the ionosphere. But the next chance will be presented only in April 2024, when another complete solar eclipse will travel from Texas to New England.