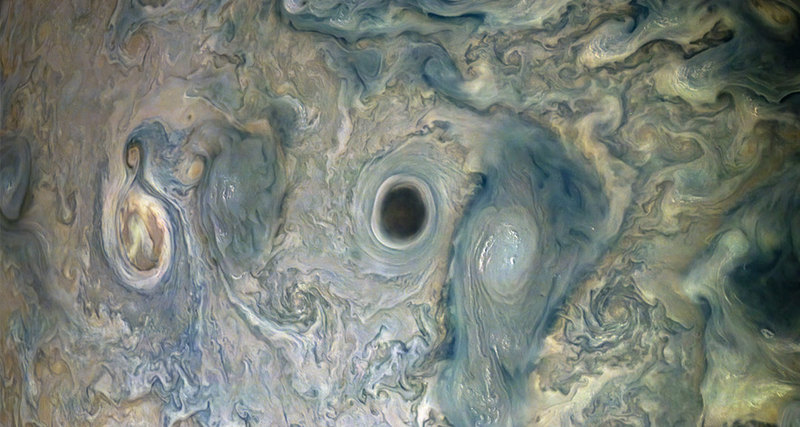 NASA Juno spacecraft captured a stunning image of a mysterious “dark vortex” of enormous proportions raging on the surface of Jupiter.

The device made this picture during its 20th fly-by-orbit around the planet on May 29, when Juno was 14.8 km from the planet’s cloud cover. The ship, which reached the gas giant in 2016, continues to supply scientists on Earth with impressive images of turbulent turbulence in the atmosphere of the planet.

According to NASA’s new release, the image was specially tinted to most clearly convey the contrast between the vortex funnel and the bright clouds around it, which literally “flared in the sun.” Scientists Gerald Eichstadt and Sean Doran created this image using data from the JunoCam camera, and called it “Jupiter’s Abyss.”

Recall that now Juno has done about half of his risky mission, having survived even a radiation storm caused by the gas giant’s powerful magnetic field. This spacecraft has repeatedly set a record of maximum approximation to Jupiter, and it is thanks to him that astronomers regularly receive invaluable information about the composition and appearance of the atmosphere of a giant planet.