The European Space Agency (ESA) published the last information which the device Rosetta before collision with Churyumov-Gerasimenko’s comet managed to transfer.

After 12 years in space and nearly two years together with a comet 67P/Churyumova-Gerasimenko, the epoch-making mission of the device Rosetta came to the end forever. On September 30 this year, being in 570 million kilometers from the Sun, Rosetta was destroyed by collision with a comet surface. Preliminary maneuvres began in August, and at distance of 20 kilometers from a comet the device began descent which took about 12 hours.

Closing speed of Rosetta with a surface made about 0,5 meters per second that twice more slowly, than in case of the fit of the Philae space probe first in the history to Churyumov-Gerasimenko’s comet on November 12, 2014. Now specialists of ESA published information obtained from the spacecraft which it gave on the eve of collision with a comet surface. It turned out that Rosetta faced a comet in only 33 meters from an estimated point!

The place of falling of the device in the region Maat on a comet received the name Sais, in honor of the Egyptian city where the Rozettsky stone settled down. During lowering to a surface of a comet of Churyumov-Gerasimenko of Rosetta managed to execute samplings of density of gas and plasma in low layers of a coma, to evaluate the sizes and concentration of particles of dust, and also to take comet temperature.

The device made a lot of useful operation, but energy of solar batteries ceased to be enough for functioning so nothing remained to scientists how to break it against a comet. 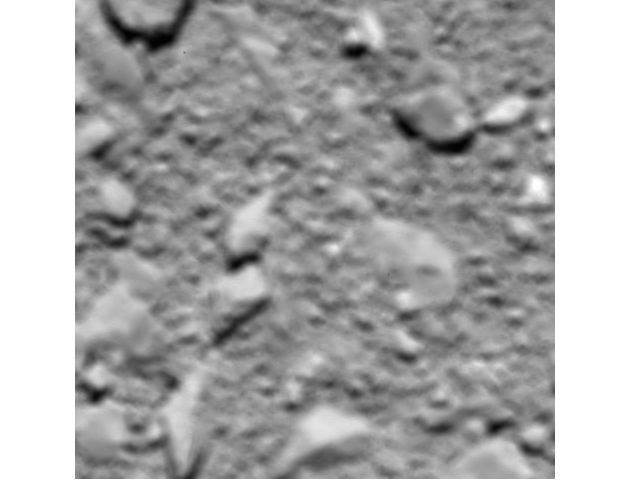