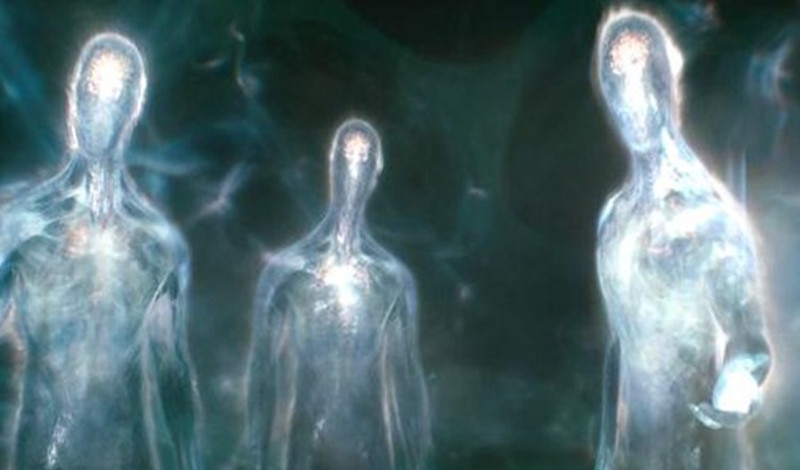 Neither our milky Way, or similar galaxies do not contain advanced civilizations. This is the conclusion of Dutch astronomy Professor at the University of Leiden Michael Garrett. This indicates a low level of heat coming from our “neighbors”. In fact the idea is the mind ahead of the Millennium need to manage the powerful energies of the surrounding stars.

Is it that we alone in the Universe? Or something we just don’t understand the visible structure of the Metagalaxy? What if our neighbors are so efficient energy users, which does not clog up the space heat waste? Alas, from the point of view of modern physics it is virtually impossible to implement. Much easier to assume that we do not understand the structure of alien communities…

In 1957, the British astronomer, writer and science popularizer Fred Hoyle put forward in a science fiction novel “Black cloud” the idea of the existence of intelligent creatures, occupying a space comparable to the distance from the Earth to the Sun in the form of organized nebula “live” black gas.

According to the story, like a space alien has invaded the Solar system, and approaching the Sun, has brought untold suffering to humans. Luckily he realized in time that on the surface of the third planet there are intelligent inhabitants, and hastily retreated into the space provided.

Black cloud Hoyle had a very strange structure of the dust particles and organic molecules, acting as a kind of biological cells. Incredible body fed with streams of electromagnetic radiation and this was constantly traveling from star to star.

Introducing some type of organic silicon life form, the Black cloud was resistant to cosmic radiation, low temperatures and the products of stellar thermonuclear reactions. In principle, such kazibao-logical entity needs to be virtually immortal.

Here only to suggest its reasonableness is very difficult — even in a science fiction novel.

A BRAIN THE SIZE OF A GALAXY

Today such ideas develops Fred Adams is an American astrophysicist from the University of Michigan.

He believes that some of the reasonable structure, similar to the Black cloud Hoyle, hiding inside the dark gas and dust flows penetrated by radiation from dying stars such as red giants.

What could constitute such forms of quaiity?

Imagine that our brain grew to the size of the Solar system and inside information spreads at the speed of light. Then only to the transfer of thoughts, wandering continually in our minds, it would take hundreds of millionaire! Of course, that the evolution of such brain-slowpoke time would be completely gone.

Even harder to imagine the brain size of our Galaxy. For all time of its existence, long enough only to transfer tens of thousands of messages that could travel from one end of the milky Way to the other.

Therefore, it is difficult to imagine a reasonable star creatures, comparable in complexity to a human brain. If they existed, they would hardly have been sufficient time for creative activities.

The flora and fauna of our planet is limited in size its gravity. For example, the tallest tree cannot exceed a hundred meters, otherwise the moisture will not come in its crown. Because life requires not only heat but also cooling.

This fact is in the 30-ies of the last century established scientist Max Kleiber. A physiologist from Switzerland noticed that for the vast majority of animals the basal metabolic rate (minimum amount of energy used by the body to sustain life at rest) is proportional to the mass of their body to degree 3/4.

In short, if the mass of a cat is 100 times the mass of the mouse, the metabolism of cats is only 32 times more than that of the mouse. Elementary calculations show that the safe temperature regime on the planet can withstand a creature weighing no more than a thousand tons, which is even more weight absolute champion of the Earth — the blue whale.

In principle it is possible to imagine a creature much larger. For this we need to assume that energy sources are supermassive, sverginate body doing only slow reproduction of its cells.

Then we find that the weight of this “multicellular amoeba” reaches several thousand tons. However, it will have a mechanical factor limiting growth. Especially because it is unclear how there will be such a creation and how it will feed and develop in complete immobility.

Or maybe it will be an intelligent ocean-like the ocean covering the planet Solaris in the novel by Stanislaw LEM? This thinking of the vast abyss stands before us as the result of dialectical development of a solution laboragory chemicals to the final stage of “homeostatic ocean”.

Under the influence of external conditions that threaten its existence, Solaris passed all stages of formation of single – and multicellular organisms, the evolution of flora and fauna. In other words, he didn’t respond hundreds of millions of years, as terrestrial organisms, to habitat, to perpetuate the evolution of the mind, and became the master of nature immediately and forever. And why not?

Australian physicist Reginald Cahill from Adelaide University believes that the universe works the same way as the human brain. Her inherent consciousness, and it develops because self aware. All of its structure from the microparticles to the universal network of galaxies — the similarity of the neurons that comprise the gray matter of our brain.

In the hypothesis of the Cahill world is an infinite network with nodes, elements, or monads. Monad Cahill in the first moments of the Big Bang that produced our world, formed the ever-evolving an extensive network. Such education of mathematics called fractals.

However, not all fractal structures Cahill fill the space completely, stretching that infinite network. How many would be closed on themselves in the form of distortion, forming a “defect” of the space. These “defective” fractals and form what we call matter. If you compare the fractal network with a vast ocean, the “defects” is the Islands.

According to the theory of Cahill, the universe is born and develops according to the canons of Darwinian evolution. Monads are born, grow, age and die. The space, of course, has a mind (gray matter), to indicate which Australian dreamer offers a bit of a strange term — “noise”. But as they say, though a pot name, only in an oven do not put. The important thing is that this noise is the product of evolution and the Universe is filled with consciousness exactly the same as our brain.

Fantastic universe Cahill is the infinite universe gradually born out of nothing. Some monads, like the neurons influence each other, imbued with the “sympathy” and form more complex structures…