Alien life has offered to look at mini-Land 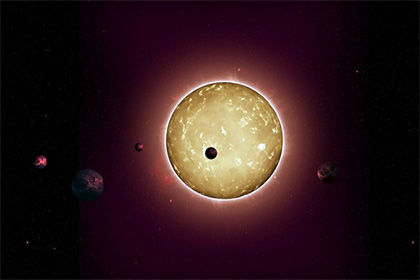 Astronomers from the US and the UK found that many earth-lik of extrasolar planets located in the habitable zone around its star unsuitable for life. Their study is published in the journal Monthly

Notices of the Royal Astronomical Society, briefly about it, reports Imperial College London (UK) I if the sizes of exoplanets comparable to earth, and sh you’ll be within the habitable zone (in order to exist liquid water), scientists suspect the presence of the planet conditions for the origin of life. A new study of astronomers has shown that this method not always justified.

Scientists have considered the stars of class M, which are the most common bodies in the milky Way (they account for 75 percent of all stars). These include red dwarfs, which is three times lighter than the Sun and two to three times fainter than it. In last time in the vicinity of stars of class M have found many exoplanets.

Most satellites of red dwarfs born with dense atmospheres of hydrogen and helium, which account for about one percent of the mass of the exoplanet (for the Earth this option is ten thousand times smaller). The greenhouse effect on a celestial body with such a tight the atmosphere would be too pronounced, which would lead to the impossibility the reality of liquid water and life.

However, x-ray and ultraviolet radiation from the parent star would allow, according to scientists, to evaporate more part of the atmosphere and would make it less dense and livable. New modeling has shown that this is not always the case.

In the study notes that the loss of the atmosphere earth-like exoplanet in the vicinity of the red dwarf is determined by two factors: the mass celestial body and its location in the zone of habitability.

So, if the planet is at the inner edge of this zone, and the mass of its nucleus is not more than 90 percent of the mass of the Earth, the radiation from red dwarf will be enough loss of a sufficient amount of the gas envelope and the appearance of goodlive conditions. This is true even for cases when the mass of the atmosphere initially, is one percent by weight of the total celestial body.

However if earth-like planet located on the outer edge of the zone habitability, for the origin of life – it should be no more than 0.8 times heavier than Earth. Meanwhile, any object whose mass is comparable to the earth will not be habitable, the study showed.