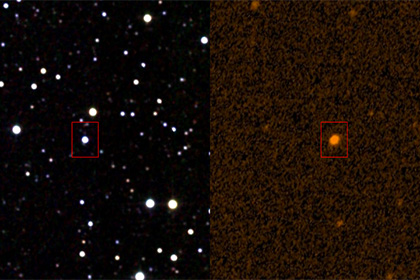 Astronomers from Germany, Estonia, the USA and Russia couldn’t find periodic changes of luminosity in KIC 8462852 star. Earlier colleagues of astronomers have connected existence around a star of alien megastructures with it. The pre-print devoted to this research is published on the website arXiv.org.

The discussion about KIC 8462852 is conducted within the last year. Earlier carried out analysis of films which is carried out by the authors participating in the real research has shown that luminosity of KIC 8462852 didn’t change. These conclusions disprove these works of other scientists, in particular, of Bradley Schaefer.

The star of KIC 8462852 is at distance of 1480 light years from Earth in the Cygnus constellation. Her weight and radius about 1,5 times bigger, than at the Sun. The star is interesting that as a number of astronomers believes, its luminosity with strict frequency changes for 22 percent.

There are several explanations of this phenomenon. Among them — existence around a star of a cometary cloud which, however, demands too large number of such celestial bodies in a star orbit (about 650 thousand). Other hypothesis is existence around KIC of 8462852 artificial constructions.