Alien signals can be too complicated for us

“Each of these stars can have New York, Paris, London, and we do not even know it,” says Nate Tellis of the University of California at Berkeley, commenting on the analysis of 5,600 stars conducted by the Keck Observatory in Hawaii, which houses one of the most powerful telescopes in the world, last spring. Tellis, who searches for laser beams, powerful flashes of photon beams that live some nanoseconds, asks an important question: can there be anything special in these data, some signal of a reasonable civilization sent to Earth?

Astronomers analyze the data of the Keck Observatory and Kepler’s missions and find more and more terrestrial planets rotating in other stars. At the same time, the chances are growing that something interesting may appear on one of these planets.

Imagine yet another form of life in a distant world that similarly searches for laser light, says Tellis. “If we sent our telescope to Earth from a distance, we would not have seen what people are doing either. Because the Earth does not send laser beams to the universe, signaling its existence. Why should other worlds do this? “.

Astronomers at the Keck Observatory spend hours looking at the night sky in search of exoplanets and accumulating a huge amount of data on potential new worlds in the Milky Way. Tellis, along with astronomer Jeff Marcy, dived into the Keck data archives with 67,000 studied spectra from 2004 to 2016. They armed themselves with a computer algorithm detecting lasers, which combed all the data on the records of stellar light made by 10-meter Keck, and the spectroscope with high resolution. Laser emission lines generated by unnatural sources can be distinguished from natural astrophysical sources by their monochromism. The algorithm identified 5000 interesting objects that require further study. Then Tellis and Marcy analyzed them manually, eliminating all but 12 signals. 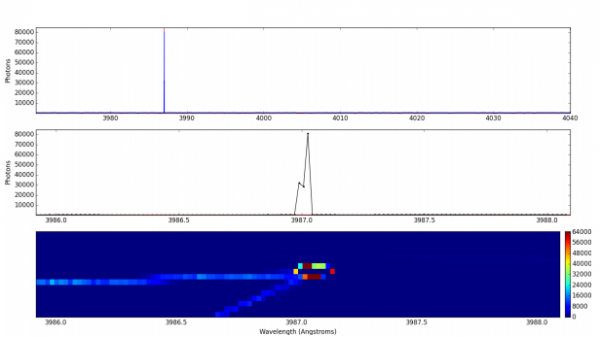 Tellis and Marci were able to exclude the signs of laser signals from all the spectra studied. “We have not found convincing evidence of extraterrestrial laser radiation among all 5,600 stars at a power level of 3 kW to 13 MW.” These results will help narrow the possible range of distribution of intelligent civilizations.

Based on the speed with which astronomers have discovered earth-type planets on the orbits of stars, Tellis and Marcy have calculated the number of terrestrial-type planets that they need to explore. “Since these star systems contain about 2000 terrestrial planets, we exclude Milky Way models in which more than 0.1% of warm earth-type planets contain technological civilizations that, intentionally or not, send us laser beams.”

In short, if technological civilizations appear only on 1% of such terrestrial planets, the study of Tellis and Marcy should have revealed about 20 such civilizations.

There is also the possibility that technological civilizations exist, but for many millions of years are more developed, have technologies that are beyond our reach, or do not want to contact with primitive civilizations like ours.

“I think when you are looking for extraterrestrial life, it’s important not to get upset because of the lack of results,” Tellis said. “The search has been going on for 60 years, and there are no results, and no, and no.”

“If you propose to conduct a SETI study at the Keck Observatory for thousands of hours, no one will give you,” says astronomer Jason Wright. Meanwhile, there are a huge number of sets of astronomical data waiting to be looked at the second time. That for one rubbish – for another treasure, even if it is a question of searching for life in the universe. “