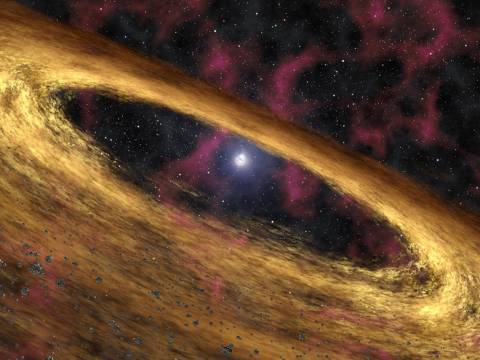 The researchers found the threat component, which is accompanied by the rapid RF pulses (FRB). It is about associated with them a powerful gamma-radiation.

A rapid pulse is called a single pulse, which lasts a few milliseconds and may have a cosmic origin. The flash power is comparable to the emission into space of the energy emitted by our sun over several tens of thousands of years. The first FRB was recorded in 2007 and is still among scientists there is no common understanding of the nature of this phenomenon. Some experts believe that such signals can even be of extraterrestrial origin.

A new discovery published in the Astrophysical journal Letters, makes radio even more mysterious. Researchers analyzed the flash FRB131104 using optical, x-ray and gamma-ray telescopes. With the help of Observatory Swift was discovered, the shadow FRB131104.

We are talking about the most powerful gamma-ray flashes, which last much longer than quick impulses, from two to six minutes. This releases energy, which can be a billion times larger than its value for the radio. In other words, is the source of the outbreak is relatively close to the Ground, the life of the last would have been destroyed.

The existence of gamma-shadows FRB makes you question the main theories of the origin of fast radio pulses. These signals too strong for that phenomenon can be attributed to a Magnetar – a neutron star that has a very strong magnetic field. The calculations also do not explain the phenomenon of super supernova.

Hypothetically radiation could be generated by neutron star mergers, but that the latter should “look” at us at a special angle. In the future, scientists intend to test the last hypothesis using observatories such as LIGO (laser interferometric gravitational-wave Observatory). Perhaps the experts will be lucky enough to answer a number of questions.

Not long ago, researchers from China called the nature of the signal FRB 121102. Scientists have linked its appearance with the amplification of electromagnetic radiation when passing through the asteroid belt in one of the remote planetary systems.