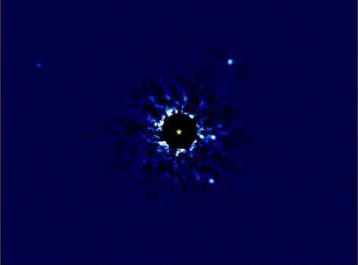 Scientists joined astronomy made over several years, creating a mesmerizing timelapse of a distant star system.

Somewhere far four planets revolving around a bright young star, and now, after seven years of close observation, we can see them year after year slowly follow their cosmic cycles.

Something unspeakably majestic felt when watching those circling in the void of worlds, each of which obeys all the same laws of planetary motion that were discovered by Johannes Kepler four centuries ago. And although we can see the satellites on the orbits of neighboring planets, it is unlikely that we will ever have the opportunity to observe from afar for the “dance” of our own Solar system.

The star HR 8799 dot in the center of the video is in the constellation Pegasus at a distance of about 129 light years from Earth. It is about five times brighter than the Sun and she’s only 30 million years, which by star standards is equivalent to the class of newborn stars.

All four visible planets more massive than Jupiter, that is quite large. One orbital revolution takes them from 40 to 400 earth years. It is possible that closer to the star there is another small rocky planet, and that accumulations of dust on the outskirts of the system hidden fifth big world.

This system of exoplanets is one of the first, which scientists were able to collect as much visual information. Observations were made using the Keck Observatory atop the Hawaiian volcano Mauna Kea. The distance to the stars was quite close, and the sizes of the planets large enough to have one of the telescopes recorded them. Graduate student Jason Wang, of the University of California at Berkeley made a video by compiling seven images of the system obtained in the period August 2009 to the summer of 2016. He then interpolated the motion of the planets between the still pictures. The result was a magical celestial spectacle, one of those that the earth observers are waiting for centuries.

“So amazing to see with your own eyes Keplerian motion in action on the example of the whole system. It’s just great that now we have such opportunity,” said Wang.

Studying young stellar systems, such as HR 8799 dot, scientists hope to learn more about how planets grow and develop, and maybe even get an idea of what was the beginning of our own planetary neighborhood.

“Not in our power to rewind time back to see how was our Solar system billions of years ago. But we can study young star systems to understand the principles of their formation”.