Aliens have to look near the planets become stars 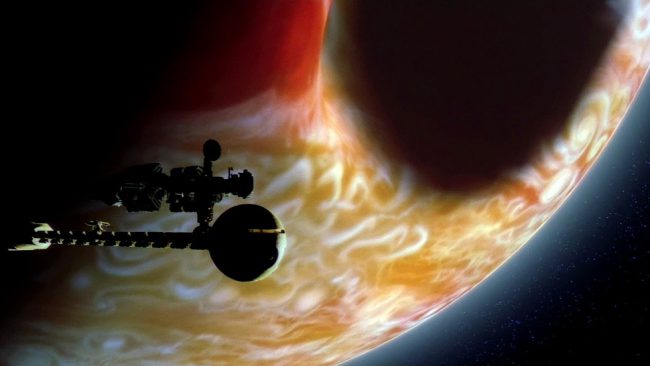 Jupiter is often viewed as a “failed star”, it is not surprising that many futurists and founders of science fiction trying to show and describe in their works and the work process, called planetary formation. According to a new study, this process is indeed possible. Moreover, if we want to one day find intelligent extraterrestrial civilization, should first look for planets, but rather gas giants that have already passed or are in the process of this planetary star formation.

In a forthcoming article in the journal of the British interplanetary society physicist and astrobiologist Milan M. Cirkovic of the Belgrade astronomical Observatory offers scientists from the SETI project a completely new approach to the search for signs of the existence of advanced extraterrestrial civilizations. Cirkovic suggests looking for “star-shaped” objects in planetary systems, as they may be signs of extraterrestrial astringently. To such conclusion the scientist pushed the inspiration came after reading the work of British physicist J. Martin. Fogg, in which he offers to turn Jupiter into a kind of mini-star.

Those of you who have read the classics “2010: the Year of coming in contact” (1982) by Arthur C. Clarke should be familiar with the concept of planetary starburst. In this novel of alien monoliths transformerait Jupiter into a small star, which in turn leads to the fact that Europe (one of the moons of a gas giant) is transformed from an ice world into a lush jungle. Seven years after writing this book, Martin Fogg decided to take this very sci-Fi concept and transform it in real science. In its work for the year 1989 “the Transformation of Jupiter into a star: the first step to terraforming the Galilean moons” Fogg explains how this truly amazing example of astroengineering can actually implement.

The idea is to release the gravitational energy of the gas giant due to the miniature black holes directed right in the center of the mass of Jupiter. In contrast to the fusion reaction of our Sun, or any other “normal” stars, compact black hole in the accretion process will absorb the mass of Jupiter from the inside, forcing him to escape a huge amount of energy.

This energy will be repeatedly absorbed and again released, enveloping the entire surface of Jupiter. As soon as energy reaches the surface, it will be scattered throughout the area, as any other kind of star radiation. According to Fogg, if we turn thus Jupiter into a star, its Galilean satellites, too, will undergo a transformation process and become suitable for living worlds. Moreover, zvezdoobrazovaniya around Jupiter we will be able to build some semblance of a compact shell of the Dyson to capture its energy.

Cirkovic believes that Fogg was thought in the right direction and the people of the future will be able to bring this concept to even greater heights.

“If near stellar objects were satellites of other planets — but we have recently found planets near brown dwarfs, these areas are can be much more favourable habitats for than it might seem at first glance,” says Sinkovich.

“And since these objects are very numerous, they would represent a great “filling station” for interstellar travel.”

Cirkovic believes that his idea is so good that we need to take into account the possibility that advanced aliens are already engaged in such projects of a gigantic scale. Cirkovic says that it is reasonable to adopt the Copernican Principle, i.e. the idea that we and the Earth are no special on the background of the universe, and nothing (not able) to prevent the emergence and development of life (including advanced civilizations in other parts of the Universe.

Since the publication of the work of Fogg, we learned a lot about black holes and how they work. And although it may sound crazy and incredibly dangerous, in the opinion of Sercovich, postlude or advanced extraterrestrial civilization will find a way to create miniature black holes, learn how to artificially control their growth and even control their movements in space.

Of course this is a planetary process of star formation would be extremely dangerous and possibly not worth the risks that will accompany him. Any manipulation of black holes — including the smallest — will be incredibly dangerous. Cirkovic worried that a lot of factors (including errors in the build to a terrorist scenario) can cause a miniature black hole can swallow the Earth or some other habitable by the time the planet.

“In the final stages of star formation, about 100 million years after the beginning, transformed into a star Jupiter is incredibly bright and can be very unstable,” he says.

“It ultimately may call into question the existence of the rest of the Solar system, and perhaps that will be next to her at the time. The issue will require the implementation of other astroengineering projects. But if you think about it, the time advanced civilizations that will remain after us will find a way of turning the planet into a star, I think they will already be able to solve all accompanying questions and consider all possible consequences.”

Needless to say how difficult it is to search the planet past the star formation process. However, in the opinion of Sercovich, it is, nevertheless, possible.

“Observational astronomy over the past decade, dramatically moved forward. Although the search zvezdoobrazovaniya objects is very challenging, which side do not look, nevertheless such a possibility may appear much sooner than we expect”.

In the framework of a simple research mass and radius of the object will be to see what the stars are familiar and we know too little. The peculiarity of their brightness and light output will also speak volumes. In addition, if the estimated zvezdoobrazovaniya planet is in a binary system, especially in such a binary system, where in the habitable zone companion star are planets, these candidates should be considered first.

The main problem, according to Sercovich, is to determine whether in a particular case, the process of planetary starburst natural or artificial. It is possible that we will make many false conclusions about this.

“We are so accustomed to look at the natural processes of stellar evolution, we use the brightness of the stars as a determining factor of its radius, age and mass. In the case of “artificial star” such methods of definition can lead us astray,” the scientist said.

In their study, Cirkovic indicates that we already have telescopic technology necessary to search for planetary zvezdoobrazovaniya, so start looking for we can at any time. The only obstacle standing in the way of new knowledge, is a lack of interest or simply too lazy. Now the main trend, stimulating the search for aliens is “dimanski” SETI — search for extraterrestrial megastruktur, like the hypothetical Dyson sphere.

According to Sercovich, even though objects, like the mysterious “flickering star” KIC 8462852 really is of great interest to astronomy, to prove that the processes associated with them are the result of advanced extraterrestrial civilizations would be extremely difficult. Nevertheless, with further development of our telescopic technology, we will better and better understand what we are actually looking at. And it may be that we will be able to see extraterrestrials at work.