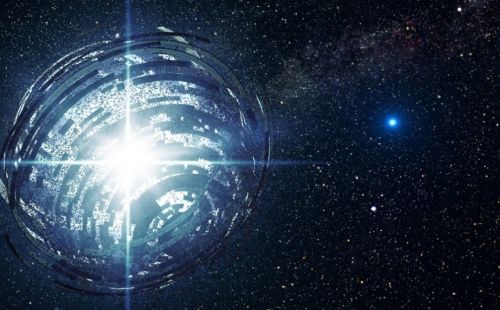 The physicist Eduard Heyndl from Furtvangensky university (Germany) has offered the explanation for possible presence of alien megastructures at KIC 8462852 — a star with observed periodic changes of luminosity which reasons aren’t established still.

According to Heyndl, periodic changes of luminosity of KIC 8462852 can be connected with activity of aliens. In his opinion, they take away from a star energy when its luminosity goes down.

The scientist has offered the possible structure of circumstellar group through which representatives of an extraterrestrial civilization if she exists, get energy from KIC 8462852, and also has created the simple model describing luminosity change.

The star of KIC 8462852 is at distance of 1480 light years from Earth in the Cygnus constellation. Her weight and radius about 1,5 times bigger, than at the Sun. The star is interesting that as a number of astronomers believes, its luminosity with strict frequency changes for 22 percent.

There are several explanations of this phenomenon. Among them — existence around a star of a cometary cloud which, however, demands too large number of such celestial bodies in a star orbit (about 650 thousand). Other hypothesis is existence around KIC of 8462852 artificial constructions.