All black holes merge into one scenario 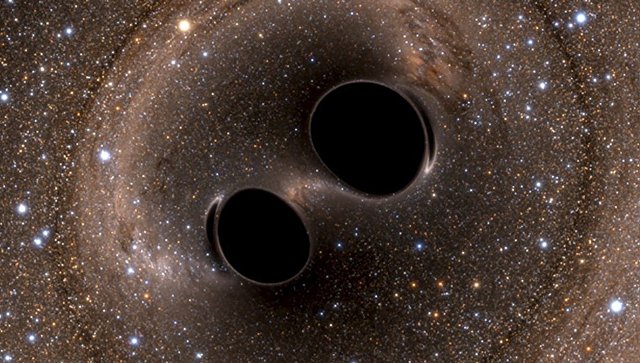 Analysis of the data collected by LIGO during the discovery of the first three mergers of black holes shows that all objects of this kind arise and merge into a single scenario in systems of two superlarge stars.

“The LIGO detector has given life to a kind of cosmic paleontology, paleontologists have never seen a live dinosaur in their lives, but they can understand how it looked and how it lived through its remains. Similarly, we can analyze data on mergers of black holes and use them to To find out how their progenitor stars looked and interacted during their short but violent lives, “explains Ilya Mandel from the University of Birmingham (UK).

In September 2015, virtually immediately after the inclusion of the updated LIGO, scientists discovered a surge of gravitational waves generated by merging black holes with a total mass of 65 Suns. Subsequently, LIGO recorded two more bursts of gravitational waves, only one of which was officially recognized by the scientific community.

The data collected during these outbursts are actively studied by scientists today for several reasons, including because they did not expect to see black hole mergers so quickly and so often – originally the LIGO creators, as RIA Novosti told Kip Thorne (Kip Thorne), they expected that they would see collisions of pulsars.

As Mandel explains, mergers of black holes must occur under very specific conditions – for example, the distance between them should not exceed 20% of the distance separating the Earth from the Sun. Given the high mass of black holes detected by LIGO, the execution of such a condition is extremely difficult, if not impossible, which led to another series of disputes among scientists after the publication of the results of observations on LIGO.

Mandel and his colleagues tried to calculate the conditions in which black holes were born that gave rise to all three bursts of gravitational waves recorded by LIGO – GW150914, GW151226 and LVT151012. Scientists were primarily interested in whether they formed in similar conditions and similar scenarios, which would simplify the miscalculation of how many black holes merge each year in the visible universe.

As the calculations of scientists based on data from LIGO showed, all three pairs of black holes were born in absolutely identical conditions – in close pairs of very large and short-lived stars, in the depths of which there were almost no astronomical “metals” – elements heavier than hydrogen and helium.

These stars were located close to each other so close that at a certain stage of their development they surrounded a common gas shell, which made such pairs almost indistinguishable from one large star for an external observer. Their mass, according to scientists, was from 80 to 160 Suns and they rotated around each other in a very tight orbit, making one revolution in about 500 days.

At a certain stage of their life, this shell became unstable, and the stars dumped it, losing energy, which made them closer even closer, to the distance necessary to merge after they turned into black holes. The lack of “metals” in this scenario, as the scientists say, is necessary in order for one star to “pull” on itself the matter of a neighbor, quickly turn into a black hole and leave less “building materials” to form a second, less large singularity.

According to astronomers, in large globular clusters of stars in our Galaxy and beyond, there are many such pairs of luminaries, and the frequency of their formation will be sufficient to explain why LIGO recorded three such events in just one year of work. The first data that LIGO will receive after the restart in December last year, will help to find out whether it is so or not, conclude Mandel and his colleagues.