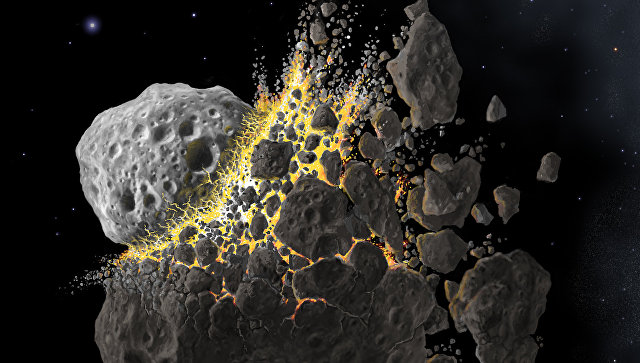 Almost all the meteorites that fell to Earth during the entire existence of mankind were generated by five large “mega-asteroids,” which had broken apart in the distant past.

“It seems that the differences in the composition of meteorites are due to the fact that their ancestors, which originated in the solar system about four billion years ago, consisted of extremely heterogeneous layers of rocks, I would not be surprised if all the bodies from the main belt of asteroids arose from the disintegration of an extremely small number of larger objects, “says Stanley Dermott of the University of Florida in Gainesville, USA.

Guests from the sky

In the past few decades, scientists around the world are actively monitoring near-Earth asteroids and conducting a kind of space “census” among them, trying to understand how dangerous they are to humanity. There are so many asteroids in the near-Earth space that astronomers had to create special scales to assess how likely their fall to Earth.

Despite all this and the huge amount of asteroids discovered in recent years with the help of ground-based telescopes and the WISE infrared orbital observatory, many large asteroids and a myriad of smaller objects the size of the Chelyabinsk meteorite that fell to Earth in February 2013 are still not open humanity.

As reported by NASA in 2011 at the first presentation of the NEOWISE catalog, today we know only about five thousand asteroids the size of about a hundred meters, while their total number is estimated at several tens of thousands. The number of smaller objects within the main belt of asteroids can be even greater and reach a million.

Dermott and his colleagues uncovered an unusual fact that unites almost all these celestial bodies and can simplify their search and cataloging in the near future by studying the five largest “families” of asteroids.

By this word, astronomers refer to groups of asteroids that rotate along a similar orbit and have a similar composition and other properties, presumably indicative of their common origin. As a rule, they are called by the name or the largest, or the first open “member” of the family.

The largest “collectives” of asteroids, for example, the families of Flora, Vesta, Pulana, Evlaliya and Nisa, include tens of thousands of small and large objects, whose diameter can reach several tens of kilometers.

The consequences of space “billiards”

The authors of the article conducted a new “census” among these five families of asteroids, “blindly” analyzing the nature of the motion along the orbit, the brightness and all other physical properties of all the asteroids that live in the inner part of the main belt.

Similarly, as the astronomer notes, his team tried to “catch” those representatives of the five main families of asteroids, who for some reason were forced to change their orbit in the past somewhat.

In this search, scientists relied on a simple pattern known to astronomers for many decades – if an asteroid belongs to a family, then the angle of its orbit and its elongation are rigidly dependent on its brightness.

If so, why are the new members of these families so mottled with mineral and chemical composition? As explained by Dermott, metal meteorites are likely to be fragments of the nuclei of these “mega-asteroids,” and various stony objects are fragments of the mantle, bark and other layers of their subsoil.

The discovery of the general nature of most near-Earth asteroids, according to the astronomer, is extremely important in the context of protecting the Earth from possible asteroid “attacks”. Now it will be easier for scientists to predict the chances of such an outcome of events and to assess their consequences, knowing that they have a similar origin and composition.

In addition, their study, as Dermott concludes, will allow us to understand the conditions under which the “embryos” of the Earth and other planets were formed, some of which were the progenitors of asteroids. This, in turn, will help scientists better and faster to search for potential twins of our planet in other stellar systems.