All mission “Rosette” in 4 minutes 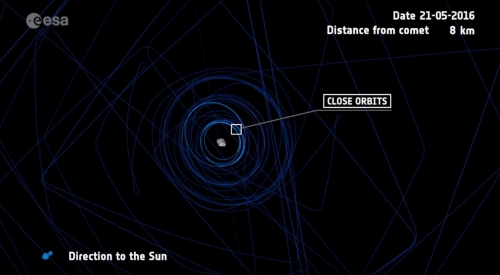 The mission “Rosette” ended, the probe collided a comet, and now the European Space Agency created a four-minute roller in which it is possible to see all traveling of “Rosette”.

Everything began on July 31, 2014 when “Rosette” finished the ten years’ traveling to Churyumov-Gerasimenko’s comet. The probe approached it on distance of 100 km on August 6 and began to come nearer slowly. After the first flights over a comet surface on Earth received accurate photos of a surface of an object which then allowed to plan the landing of Fila which terminated, unfortunately, in failure.

Maneuvres of the probe when he was going to send Fila to a comet surface, the close approaches to an object in February and March, 2015, and also adjustments of course when the probe has to be saved from the increased activity of a comet in August, 2015 became key stages of a mission. In the spring of 2016 “Rosette” went to one more traveling as it is possible closer to a comet and made several crucial observations.

Since August, 2016 the probe made a series of maneuvres which brought it closer to a comet. On September 29 “Rosette” was sent intentionally for collision with the huge rock.

When viewing simulation it is worth remembering that the path of “Rosette” is figured in a roller precisely, and here rotation there is no comet. The arrow designates the direction to the Sun when over time the camera foreshortening changes.