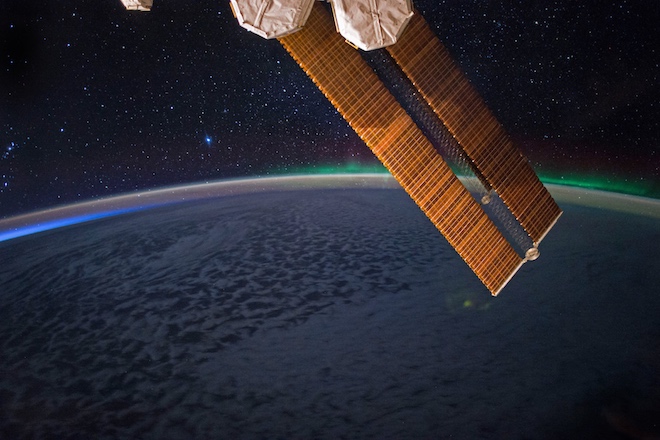 This amazing snapshot of the atmosphere above the horizon of the southern coast of Australia was made on June 19 from the ISS, according to the Earth Observatory of NASA. The cosmic panorama includes the blue dawn band and the more scattered green glow of the southern polar lights, or Aurora australis, partially hidden by the wing of the station.

Like its northern counterpart Aurora borealis, the southern lights are caused by collisions of particles high in the atmosphere. Although most of these particles flying from the Sun are deflected by the Earth’s magnetic field, some enter the atmosphere around the South Pole. When it reaches them, they fly apart, colliding with atmospheric gas and throwing out additional energy. Then gas releases this energy in the form of light.

Not all lights shine green. Their influence is affected by two factors: the type of atmospheric gas and the height at which these collisions occur. According to NASA, the captured aurora is the result of the release of light by oxygen at an altitude of 100 to 400 km. Nitrogen, interacting with particles at high altitude, illuminates the sky with red lights, and at a lower level leads to a fairy blue-violet haze, as it was in New Zealand in 2015, Yahoo News reports.

Despite the fact that the aurora is a famous scientific phenomenon, some peoples still give them a mystical meaning. For example, the Maori tribes on the North Island of New Zealand believe that the red light is the lights with which the spirits light their way.