Americans are preparing for a great eclipse 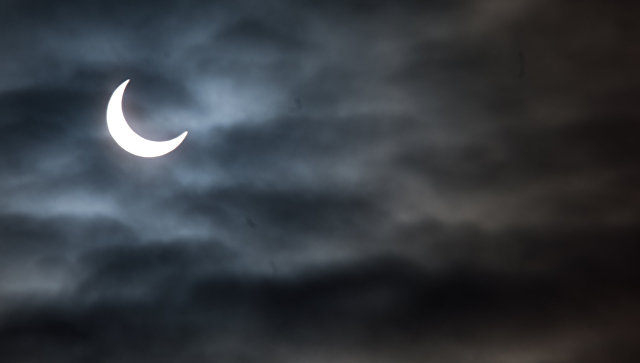 Americans are enthusiastically preparing to meet a total solar eclipse, which for the first time since 1918 will be held throughout the country: according to experts, about 8 million people will go to areas where this phenomenon can be observed best.

Residents of the United States have already dubbed the forthcoming August 21 eclipse “the great American”. A total eclipse can be observed in the territory from Oregon to South Carolina. In other parts of the country, the eclipse will be partial.

According to the portal space.com, in most areas the sun will completely go into the shade for 2 minutes and 40 seconds.

According to a poll by CBS News, 32% of Americans plan to watch the eclipse, 36% did not rule out that they will try to do it. The astronomical event was not interested in 31% of the respondents.

The whole of America is on wheels

According to the estimates of the cartographer Michael Seiler, specializing in solar eclipses, up to 8 million Americans will get into cars and go to where you can see the total eclipse. He came to this conclusion on the basis of studying cartographic and demographic data in various regions of the United States.

“It’s like 20 Woodstock festivals will be held simultaneously across the country,” he told RIA Novosti, adding that “he tried to be conservative in his assessments.” 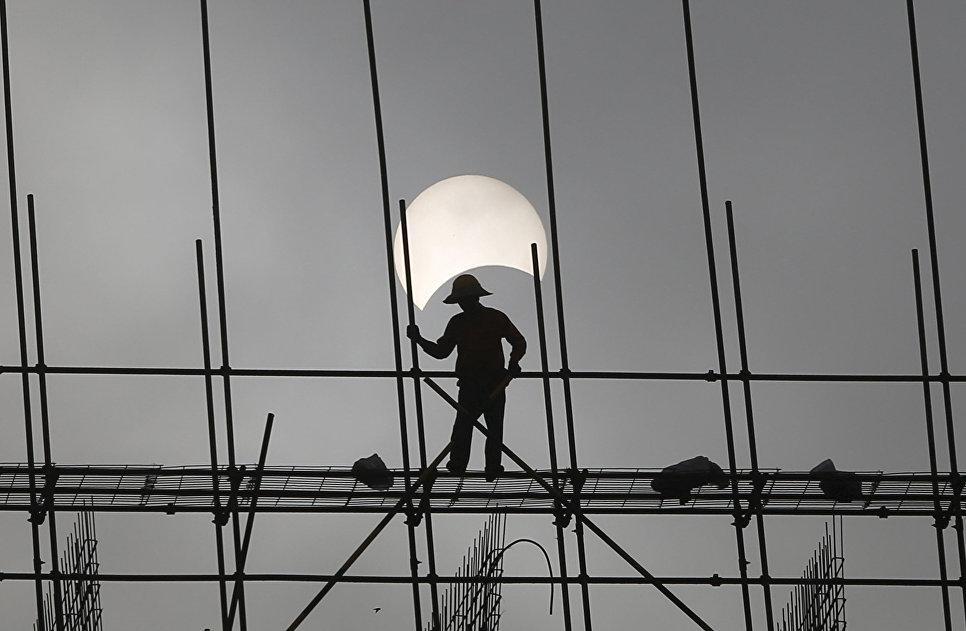 Worker on a stratified site during a solar eclipse in Phnom Penh, Cambodia, March 9, 2016

The expert did not rule out that “many residents of large cities located near the areas of total eclipse will gather to look at it at the last minute.”

Twelve million Americans will not need to leave anywhere: they already live in areas where the eclipse will be complete.

“If you are planning a small trip to the area where you will see a total eclipse, take some time.” Be prepared for the fact that you will have to travel several hours longer than usual, “warns space.com.

According to the GreatAmericanEclipse.com portal, most visitors who want to see a total eclipse should be expected in the state of South Carolina – almost 2.2 million people. About a half million can come to Tennessee, almost 1.3 million – to Missouri.

In many cities, special events will be organized on the “path of total eclipse”. For example, in the city of St. Joseph (Missouri), which plunges into total darkness in broad daylight for 2 minutes 39 seconds, the airport will provide the public with “a large number of safe telescopes.” Organizers of the action also intend to invite astronomers, who will explain to the audience what is happening. All this will be free. Visitors will have to pay only for parking at the airport. But this is the crux of the problem. As the organizers said, the airport allocated only 5 thousand parking spaces, which, in their opinion, can significantly reduce the number of spectators.

Activities on the occasion of an eclipse are planned even where the sun is not completely hidden. In particular, in the Science Center of Maryland in the city of Baltimore you can watch the luminary from the roof. In total, 5 sessions will be organized for half an hour, and in each of them on the roof can be simultaneously 300 people. For those who do not fall into the number of lucky ones, they promise a live broadcast in the planetarium. 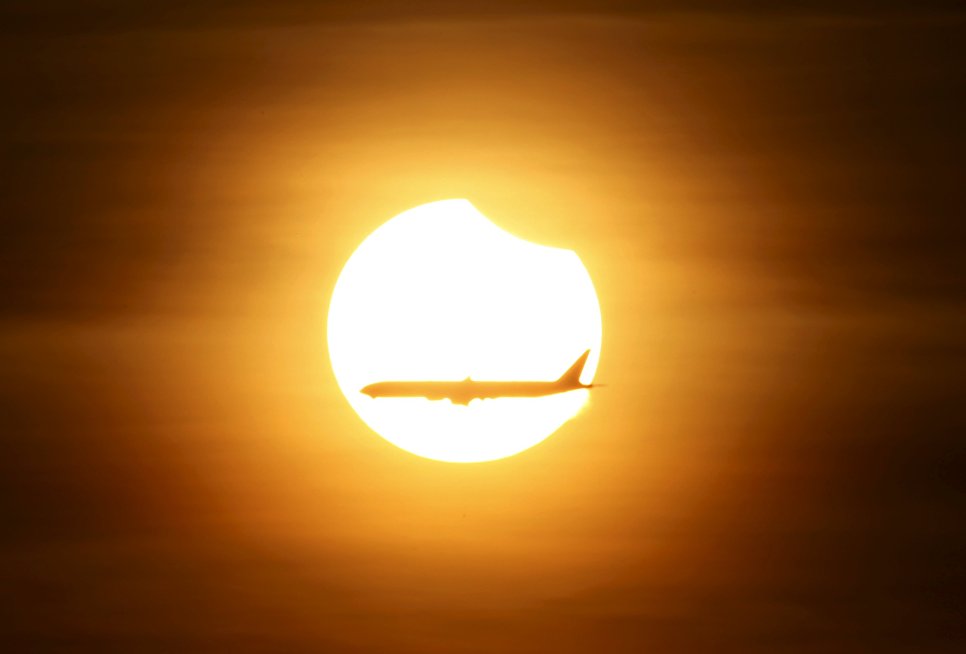 Plane in the background of the sun at the time of partial solar eclipse in Singapore, March 9, 2016

In Washington there will also be several sites for special educational events, mainly for children. Thus, special telescopes will be installed in the National Zoo and glasses will be distributed to monitor the eclipse. In the Museum of Aviation and Astronautics intend to arrange a live broadcast in the planetarium, as well as a series of lessons and workshops for children. In addition, several bars located on the roofs of buildings invite visitors to watch the eclipse while enjoying a cup of coffee or something stronger.

Washington eclipse until “not lit”

“Solar” euphoria until, it seems, almost did not affect the US capital. In any case, those residents of Washington and the environs, with whom the RIA Novosti correspondent communicated, reacted ecstatically to the eclipse. The main reason is that it will be at the height of the work day.

Two employees of the housing company who repaired the equipment on the streets of the suburbs of the capital, in response to a question whether they will follow the eclipse, simply laughed. “We will work,” they said in one voice.

Met almost immediately the girl, who works as a concierge, learned that in Washington an eclipse will be, albeit not in full, from a RIA Novosti correspondent. “I do not know, I heard that the nearest place is North Carolina, but I will not go there, I have a job, and so, of course, I would like to see – I think it will be exciting.” But nothing , Then I’ll look at the photos on the Internet, “she said.

A scientist from Washington, Alexander Kuzin, said that he went with his children on a vacation to North Carolina. “A total eclipse will be observed about 80 kilometers to the south of us, but we will not go there: we will see everything that is needed if there are no clouds,” he said.

A resident of the Washington suburb of Rockville (Maryland) Nick Olson also learned all the details from a RIA Novosti correspondent. “It will be on Monday between an hour and three days? Well, I usually sleep at this time,” he said.

Hotels – in the afternoon with fire

One of the problems for those who remembered at the last moment will be the lack of free rooms in hotels. Announcements that the reservation should be dealt with right now, as it turned out, appeared on the Internet in January. The correspondent of RIA Novosti found out that there are no places in hotels, motels, camping grounds and even hostels, and if they appear as a result of refusals, then at fabulous prices. For example, in the city closest to Washington, where the eclipse will be complete – in Charleston (South Carolina), according to the portal Expedia.com, in all hotels on August 21 there are now less than 20 available seats, the cheapest of which is $ 300 per night . But it is only one, and all the rest – not less than 500 dollars. In the city of Nashville (Tennessee), the only American megalopolis that will plunge into absolute darkness for two minutes, there are fewer than ten vacant seats left, and everyone is worth a thousand dollars a night.

Watch out, the sun

Experts recommend that you prepare well for observation so as not to cause harm to your health.

“During a total eclipse, when the sun disc is completely hidden behind the moon, you can observe it with the naked eye, but you can never look without a proper protection for a partial solar eclipse, which can lead to severe vision damage or blindness,” warns Space.com .

Many shops offer special devices for “eclipse hunters”. It’s binoculars and glasses for watching the sun. Prices range from a few dozen to several hundred dollars.

Demand for such products attracted and unscrupulous sellers. Online store Amazon was forced to withdraw low-quality glasses and tightened the requirements for those who wish to sell them. And the American Astronomical Society and NASA have published a list of manufacturers that can be trusted. It includes dozens of companies. In the list of the same stores that are trusted, not only Amazon, but also the majority of the largest retail chains of the country are missing. Basically, it includes specialized websites and electronics stores.

However, on the Internet you can easily find instructions on how to independently make devices for observation from improvised materials.