An intergalactic war in the Large Magellanic Cloud 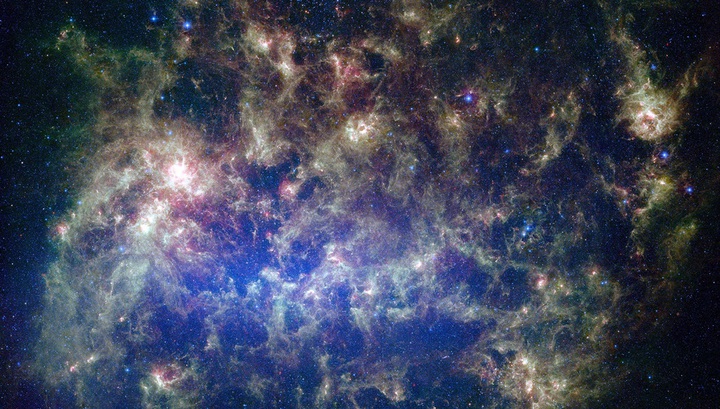 In the new study, an international team of scientists described an intergalactic war in the Large Magellanic Cloud in which new stars are born. According to astronomers, noticed their newborns formed with the complicity of the Small Magellanic Cloud.

Despite the relative proximity (160 thousand light years) in the milky Way galaxy, the satellites are the Magellanic Clouds and star formation that are still not well understood and attracted the attention of astrophysicists from different countries.

Explain that the Magellanic Clouds revolve not only around the milky Way, but move relative to each other. Today the distance between them is approximately 75 thousand light years, but about 200 million years ago this distance was much less and, according to experts, at some point, the so-called non-Central collision. It is possible even that the Large Magellanic Cloud was so close to his younger brother, partly touched it, leaving shards of.

Co-author of the new study Christian Moni Bidin (Christian Moni Bidin) from the Catholic University of the North in Chile, together with colleagues said, what ended the skirmish: as a result of her on the edge of the Large Magellanic Cloud was formed by six young stars, each of which became part of a huge ring. The diameter of the tumor is about 80 thousand light years, and light in it are aged anywhere from 10 to 50 million years. One of those stars tonight shines between the Magellanic Clouds and the remaining five are in areas where previously astronomers noticed only the old-timers.

This is surprising, since earlier in this region was not observed any signs of recent star formation, says Moni Bidin.

Young stars at the edge of a galaxy move at the same speed as the old one, which indicates that they belong to a single system, astronomers say. But, in their opinion, this result is not complete: the ring is fraught with more young stars

We have only explored the tip of the iceberg: six stars all hot and bright, making them easy to see. But there may be many more faint stars — concludes Moni Bidin

In light of these assumptions, the results of a new study, a Preprint of which is available at this link, are only intermediate.

Astrophysics will continue further study of the Magellanic Clouds, where, however, the birth of stars is observed not for the first time.