Analysis of gravitational-wave data leads to wealth of discoveries 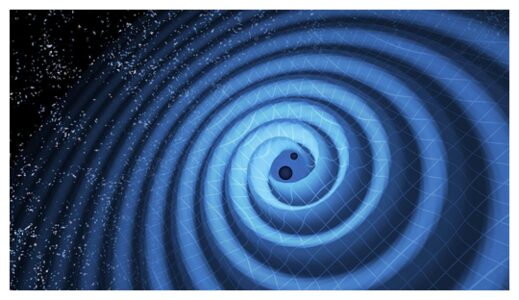 A global network of scientists has completed the first major analysis of gravitational wave data, providing exciting insights into some of the most exotic objects in the Universe.

“We are announcing the discovery of 44 confirmed black hole mergers, which is a more than a four-fold increase in the number of previously known gravitational-wave signals,” says Shanika Galaudage from Australia’s Monash University, who was part of the research team.

“With so many black holes to study, we can start to answer deep questions about how these systems came to merge.”

It’s been just five years since physicists shook the scientific world with the long-sought-after detection of gravitational waves. This Nobel Prize-winning feat recorded the ripples in spacetime created by a colossal crash between two orbiting black holes – a phenomenon first predicted by Einstein’s theory of general relativity.

Since then, detections have generally been announced one by one. But now, as detectors such as the LIGO and Virgo observatories improve, observations have exploded.

“Gravitational-wave astronomy is revolutionary – revealing to us the hidden lives of black holes and neutron stars,” says Christopher Berry, co-author and astrophysicist from the University of Glasgow. “In just five years we have gone from not knowing that binary black holes exist to having a catalogue of over 40.”

These new detections create a diverse family portrait of black hole binaries, showing that they are stranger and more common than thought, as well as illuminating their origins.

Monash’s Eric Thrane, also a co-author and Chief Investigator at the ARC Centre of Excellence for Gravitational Wave Discovery (OzGrav), compares the process of discovery to a field biologist finding a single specimen of a rare exotic species.

“That’s like the first time we saw gravitational waves,” he explains. “[But] as you start to get more examples, you start to see how all these things fit together… It’s similar for us. We’re seeing with many examples how stars form black holes, how the stars die, where they’re located, what kind of masses they have – it’s telling us how those stars live.”

Thrane, Berry and Galaudage were part of the international team of astronomers from the LIGO and Virgo collaborations, who worked on an intense analysis of the latest observing run, completed in March this year.

Their results are described in a trio of papers on the pre-print server arXiv.

At present, more black hole binaries are detected than neutron star binaries because black holes are heavier and thus make bigger waves, which are easier for detectors to pick up. But as Thrane says, “in reality we think there are probably a lot more double neutron stars merging out there than there are double black holes”.

The second paper is where it gets interesting, because it delves into what the observations really mean.

“Until now we didn’t really know how these black holes got together,” explains Galaudage. “Now we’ve seen 44 confirmed black hole mergers, we know that they can happen in two ways.”

The gravitational wave signals give astronomers information such as how big the black holes are, how fast they’re spinning, and the direction of their spin. The latter can tell us about the origins of the black hole pairs.

“This is expected to happen in dense stellar environments where you have basically a cloud of stars and black holes all kind of mingling around,” explains Thrane – for example, globular clusters.

The team also calculated the mass distribution of the new detections and found some surprises, including black holes sitting squarely in a “mass gap”, where – according to theories based on our knowledge of stellar processes – scientists didn’t expect to find anything. Accounting for these outliers and describing the boundaries of the population will be an interesting challenge for future studies.

The third paper details how the new observations were used to further test Einstein’s theory of general relativity – which passed with flying colours.

Thrane says that it has been incredible to watch the advances in gravitational wave research over the past five years, from the groundbreaking first signal in 2015 to now sometimes detecting two gravitational wave signals in a single day.

“We’re seeing the transition of gravitational wave astronomy from a dream to a reality to a mature branch of astronomy,” he says.

The current plan is to resume observing with LIGO and Virgo next year, following upgrades to the detectors that will improve their sensitivity and expand their view further into space.

“There are proposals for next-generation gravitational wave observatories that will basically be able to see to the edge of the Universe,” Thrane says, “so I think the coming years are going to be extremely exciting for the field.”