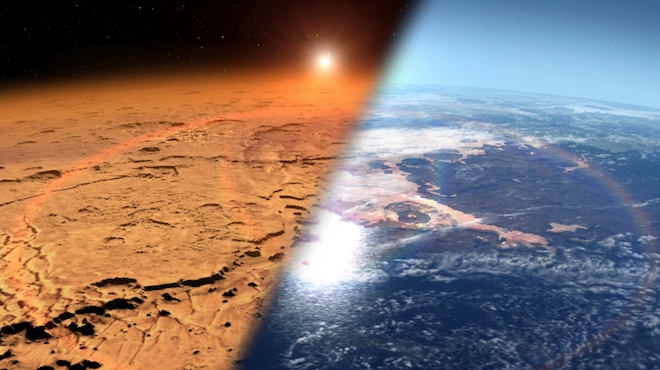 Ancient Mars, perhaps, was fueled by explosions of methane, hidden under its surface, a new study revealed. The discovery explains why in the past there was a warmer humid climate on the now frozen Red Planet.

Although Mars is now cold and dry, there is evidence suggesting that the Martian surface was once covered by rivers, streams, ponds, lakes and, possibly, the seas and oceans in the first billion years of the planet’s history, known as the Noah Era. The next 600 million years of Martian history, known as the Hesperian era, when Mars changed from a cold and humid climate to a cold and icy climate. By the end of the Hesperian era, Mars had lost most of the atmosphere, which allowed liquid water to exist on the surface.

Preliminary analyzes of Hesperian rocks suggested that the Martian climate, which was warm enough for the formation of lakes, lasted more than 3 thousand years. Evin Kite, a planetologist from the University of Chicago (USA), has long been trying to find out what events caused the onset of climatic periods favorable for the formation of lakes. Volcanoes, although they can throw greenhouse gases during eruptions and affect the warming of the planet, will not have a lasting effect on the climate.

Now the Kite team found that the existence and preservation of lakes can be explained by the melting caused by explosive emissions of a powerful greenhouse gas of methane from under the Martian surface.

Unlike the Earth, Mars does not have a large moon that would prevent the axis from rocking. Therefore, the axis of rotation of the Red Planet can tilt in a chaotic unpredictable manner, leading to constant temperature changes.

The researchers suggest that during periods of warming, the volume of ice covering Mars was reduced. This led to the fact that the clathrates beneath the surface of Mars began to decompose. Clathrates consist of methane, “locked” in ice cells. When clathrates are destabilized, they throw out methane. One such Martian explosion can erupt about 200 trillion tons (180 trillion metric tons) of methane into the atmosphere over a millennium.

“If you spread the volume of the clathrate over the whole surface of Mars, which breaks up over a geologically short interval – 10 thousand years or less, its thickness will be equal to the thickness of the dinner plate,” says Kite.

Such explosions could raise the temperature on Mars by 5-10 degrees Celsius. Although methane gradually decomposes in the Martian atmosphere, the researchers estimated that each episode of warming could last up to a million years.

Previous work suggests that the periodic explosions of methane, which are still happening on Mars, can be associated with clathrates, says Kite. “We will test this in the near future, using data from the NOMAD tool on the ExoMars Trace Gas Orbiter orbiter, which collects data from the Martian orbit.”