Ancient Venus could become uninhabitable because of its oceans 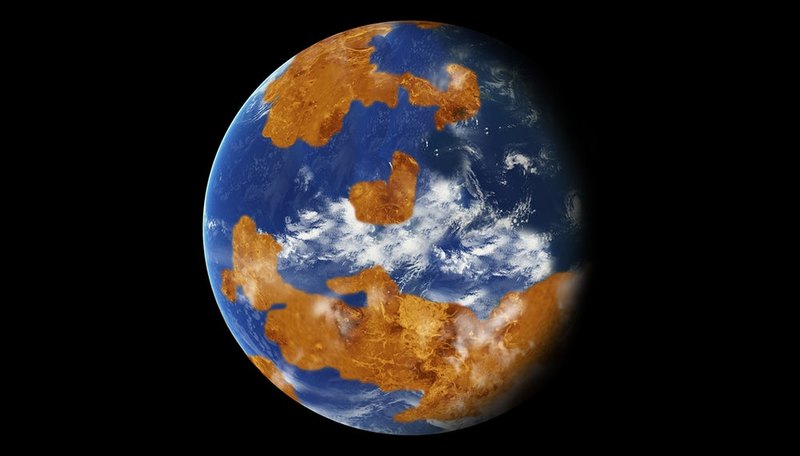 As scientists showed earlier, in the distant past, billions of years ago, Venus could be viable, approximately the same as our Earth. What happened – why now this planet looks very different? A new study found that if ancient Venus was home to large oceans, tidal forces could slow the rotation of the planet and eventually bring it to the kind in which it is known now.

The atmosphere of Venus is 96 percent carbon dioxide (for comparison, carbon dioxide in the Earth’s atmosphere is 0.04 percent); the temperature on its surface is 462 degrees Celsius. All this is partly due to the fact that Venus rotates extremely slowly: one day on it is equal to 243 Earth days, or about two thirds of the Earth year. This means that any point on the surface of the planet is exposed to constant solar radiation for months. However, this was probably not always the case: as missions to Venus showed, it, like Mars, could be home to large oceans in the distant past. At the same time, its atmosphere would have to be less “suffocating”, while the planet itself probably rotated much faster.

What has changed? According to a new study, the oceans of Venus themselves eventually led to the fact that it became uninhabitable. (The tidal forces of the oceans, as is known, gradually reduce the speed of rotation of the planet. For example, on Earth, this process leads to the fact that the day becomes longer by about 20 seconds approximately every million years.)

In a new study, specialists using several models studied what could happen to Venus in the past; in simulations, they varied the depth of the seas and the speed of rotation of the planet (from 243 Earth days, as now, to 64 days). Scientists have discovered that the ebb and flow of Venus could slow its rotation, although the speed of this slowdown would depend on the depth of the ocean and the initial speed of rotation of the planet. In the most extreme cases, tidal forces could slow down Venus’s rotational speed by 72 Earth days over a million years (this means that the planet would have come to today’s rotational speed in 10-50 million years, which is very little by space standards). This would ultimately lead to the disappearance of the oceans on the planet and to its current appearance.