Anti-ground. Secrets of the Earth’s Double 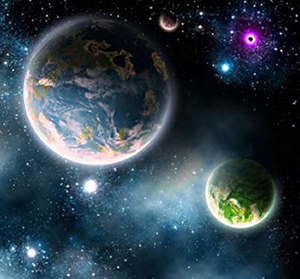 According to the teachings of the ancient Egyptian priests, a person at birth is endowed not only with the soul, but with the astral double, which according to the Christian religion is then transformed into a guardian angel. It’s certainly hard to imagine, even harder to believe in it. But in fact now it is known that the physical body of each person really has its own double – the so-called etheric body. The thought of pairing was then developed by the ancient Greek scientist Philolaus, who came to the conclusion that everything in nature is divided into pairs. Every living organism or thing, whether large or small, has its copy in nature. Moreover, Philolaus was sure that the same thing happens in the Cosmos. In his theory of the structure of the world and the Cosmos there was a heavenly body hidden from our eyes, which was later called Anti-Earth.

On the Sumerian clay tablet, the creators of which lived more than five thousand years ago, contain absolutely unique information about astronomy and the Cosmos. Even then, the Sumerians were aware of all the planets revolving around the Sun. And among them was a planet that was … a twin of our Earth. In 1666, during the next observation of Venus, the French astronomer Jean Dominique Cassini accidentally drew attention to a certain heavenly body the size of our Earth. Hanging in the sky a few days, it suddenly disappeared behind the Sun.

In the XVIII century, a member of the British Royal Scientific Society, astronomer James Short, noticed in the night sky an unknown planet, located on the same line as Venus. He watched her for an hour, and even described it: the diameter of the stranger was 2/3 of the diameter of the Earth, its distance from the Sun was about the same as that of our planet. However, this heavenly body soon disappeared from the sky. To see him again happened only 20 years later to another astronomer.

One of the most recent observations was conducted by the American astronomer Edward Emerson Barnard. This happened on August 13, 1892, when he noticed a mysterious cosmic object near Venus. The size of this object ranged from a quarter to a third of the diameter of Venus. As in all previous cases, after some time he disappeared behind the Sun.

So not on Gloria does the wall pattern, revealed in the tomb of Pharaoh Ramses VI, testify. It depicts a golden figure of a person, most likely symbolizing the Sun, on either side of which are located exactly the same planets. The dotted line of the orbit of these planets passes through the third human-solar chakra. And as you know, the Earth is the third planet from the Sun!

With the advent of modern super-telescopes, ultra-long and ultra-high-speed spacecraft, the number of secrets and mysteries of the Cosmos not only did not decrease, but even increased significantly. And this is not surprising – this is the nature of scientific and technological progress.

A whole series of data obtained in the second half of the 20th century by astrophysicists of Russia and America made it possible to draw up a diagram of the solar system. According to the calculations, all planets form two series of celestial bodies – the Saturn series and the Jupiter series. Moreover, each planet has its own pair, its twin, close in diameter and mass. Allegedly, this was also the twin of the Sun, but as a result of the explosion that occurred billions of years ago, the second Sun turned into a brown dwarf. This cooling star gradually left the solar system. Many astronomers do not deny the possibility of the existence of a double and our planet. Anti-ground – Gloria, presumably located in the same orbit as the Earth, but not visible, since all the time is hidden behind the Sun.

A sensational statement was made recently by British astrophysicists. They confirmed the hypothesis of the existence of the antipode of the Earth – the planet of Gloria, which in all respects corresponds to our Earth. For a long time it was believed that this planet rotates around the Sun and has one orbit with the Earth. Both of these planets are separated by the Sun from each other, therefore it is impossible to see Gloria from the Earth.

Here are modern arguments, indirectly confirming the existence of invisible cosmic twins. For a long time astronomers could not determine the exact position of Venus in the sky – it simply did not obey the laws of celestial mechanics. And this is possible only when the motion of Venus is influenced by the strong gravity of a celestial body located near it. In addition, what is behind the Sun, to see, just like the other side of the Moon, is almost impossible.

One of the proponents of the theory of the existence of the planet Gloria is the Russian astrophysicist, Professor Kirill Butusov, a number of discoveries and hypotheses which allow him to be regarded as the luminaries of Russian science. The regularities revealed by it testify to the fact that there is yet another unknown planet on the Earth’s orbit. “Right behind the Sun, in the earth’s orbit, there is a point called libration,” the professor says, “is the only place where Gloria can be, so what is this mysterious point?” This is the place where the celestial body is influenced by the attraction of two Other bodies are in relation to them in a state of relative equilibrium, and since Gloria rotates at the same speed as the Earth, it almost always “hides behind the Sun. However, the librational point is not always so stable, and even a small impact on this planet can move it to the side. Maybe that’s why it sometimes becomes visible.

What did the probe see?

According to the director of the Eastern European Institute for Analytical Astronomy, Academician Doppelshvaan, an American probe sent for the study of Saturn’s rings recently made a sensational discovery: “When, with the aim of studying the solar activity, the probe’s instruments were directed toward the Sun, a new planet of the solar system was revealed. , All the planets, even the weakest luminous ones, are already open.The newly discovered planet was incomparably closer to the Sun, and is clearly included in the circle of planets close to us. The astronomers of the twentieth and the twenty-first century, armed with powerful radio telescopes, did not notice two planets in the same orbit, and even the possibility of such a phenomenon never occurred to anyone. The unexpected discovery of a probe is that he discovered a second planet orbiting This planet, in terms of its parameters of mass, velocity, etc., is almost a complete double of the Earth, and therefore it is almost exactly at the opposite point of the orbit relative to our planet. That is why astronomers could not open it either in ancient times or in our time. This planet is always hidden by the Sun. Radio emission is also completely absorbed by the Sun. In photos of the probe, the planet is so far away that, apart from its mechanical characteristics, there is little to be said. However, in one of the photos, where the planet is photographed against the background of the Sun, the golden halo of the atmospheric disc is clearly visible.

So can Gloria be inhabited? It is believed that this probability is about 50 percent. Moreover, there is even a hypothesis about the existence of a highly developed civilization on Gloria. If Gloria does exist, then surely there must be life on it – in fact it is an exact copy of our planet, or at least its double.

And if she, unlike our planet, managed to avoid destructive wars, then Gloria may well be much more developed than the Earth. And if we are now discussing the possibility of living on Gloria, it’s natural, and the Glorians want to know everything about us. And it is likely that a large number of UFOs – and there are messengers far away, and at the same time close Gloria. And they closely monitor the negligent who launched their planet “relatives, and take all measures to protect their native land from the harmful consequences arising from earthlings.And if such a planet really exists, it may well be an ideal launching pad for flights to our Earth In this case, the interplanetary spacecraft should not be transferred from orbit to orbit, and then it becomes clear why cataclysms, as well as nuclear tests conducted on Earth, have always provoked and raise the interest of UFOs.

Modern researchers believe that the long-term observations of Gloria were possible because of the planetary catastrophes that made it move from its place. It is estimated that the invisible space in which Gloria is now located is equal to six hundred diameters of the Earth. This suggests that the place where Gloria can hide, even more. In order to capture it from a closer distance, you need to reach an acceptable place. However, this is not so simple.

For example, the space telescope SOHO, which monitors the Sun, can not detect a mysterious planet because of its location, and Mars and its orbit may be called the ideal place for this, but most surprisingly, more than a dozen automatic interplanetary stations from different Among them “Phobos-1,” Phobos-2, “Mars-Observer. What is it, their imperfection or accident? It is unlikely! It is possible that their disappearances are due to the fact that they could capture something that on Earth should not know. Is not it about Gloria? If this is the case, the Glorians do not really want to be recognized by inadequate, and therefore dangerous to them earthlings.

NASA astrophysicists have speculated where the Anti-Earth could have been lost, considered to be the twin of our planet.

The existence of Anti-Earth became known about ten years ago, when researchers found in space a mysterious object located on the opposite side of the Earth. At the same time, it was about twice as large as the Earth.

On the discovered planet, the duration of one calendar year was 300 days, and the surface temperature did not rise above 22 degrees Celsius.

To study the find, two spacecraft were sent to Anti-Earth, but the planet suddenly disappeared, and the probes could not extract any information about it.

All this time, scientists are trying to solve the mystery of the disappearance of the celestial body. It is assumed that Anti-Earth could descend from its orbit due to violation of the laws of gravity.