Opening in 2016 the planet Proxima b was a real sensation. The Earth-like object, located near the star of the Proxima Centauri star nearest to the Solar system, is only 4.24 light years from us, and moreover it seems to be a very promising candidate for the existence of life – how can one not rejoice? Unfortunately, the new results of observations of the exoplanet ruin all our hopes for the potential for its habitation, not to mention our desire to someday send there a spacecraft for research. 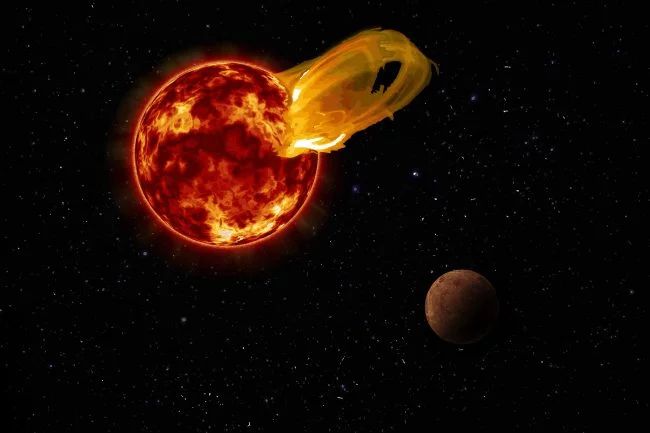 Artistic representation of the Star Proxima star outbreak, created on the basis of the obtained observations of the luminary

Analyzing the data gathered by the network of radio telescopes ALMA (Atakamskaya large array antenna millimeter range), scientists recently found out that the star of Proxima Centauri in March 2017 threw into space just a colossal in its size flash. If there was any form of life on the planet Proxima b, then the outbreak, which turned out to be 10 times stronger and brighter than the brightest and most powerful flash on our Sun, was simply burned out.

“March 24, 2017 was not an ordinary day for both the star Proxima Centauri and the planet Proxima b”, – said in a press release of the National Radio Astronomy Observatory Meredith McGregor, an astronomer from the Carnegie Institution.

From the data analyzed, McGregor’s research team found out that within just 10 seconds the brightness of Proxima Centauri’s star increased 1,000 times that day. In this case, the whole event (including the previous less bright flash) lasted less than two minutes. But during this time, the planet Proxima b was exposed to a level of radiation 4000 times higher than the level of radiation that the Earth usually undergoes during solar flares.

For all living things that could be at that time on the surface of the planet, this event, most likely, was the last.

“It is very likely that all life, if any, on the planet Proxima b, was destroyed under the impact of the colossal energy radiation that arose as a result of this outbreak. For billions of years since its formation, Proxima b could have been subjected to flares similar to this one. The strength of the last flash was so great that it would easily evaporate any atmosphere or ocean, actually sterilizing the surface of the planet. From this we can also conclude that not only the “right” distance from the star to the planet should play a decisive role in determining the habitation potential of a particular world, and also talk about the possibility of liquid water on the surface of the planet, “added McGregor in the press- release.

At the moment, new telescopes are being developed that will allow us to look more closely at the planet Proxima b, and also help to find out if it contains any life (which under the circumstances is unlikely). Even if it turns out that the exoplanet is uninhabited, new knowledge about it can help us in finding life on other planets, outside of the Centauri system. For example, in the same TRAPPIST-1 system, several of whose planets, at least for now, look promising.

Dwarf stars like the Centaurus Proxima are one of the most common types of stars in our galaxy. And we already managed to find some interesting planets near some of them. But if you consider that such stars are very inclined to such events, as the example of Proxima Centauri described today, the only chance of survival of any life forms on the planets located next to such stars will be the existence somewhere deep underground.