Around black holes there are liquid ring 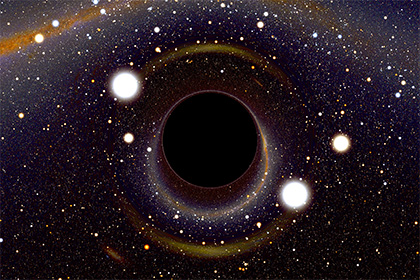 Physics from Peking University (China) explained the existence of the liquid rings around black holes. Typically a black hole surrounded by accretion disc, matter which falls to the gravitational object. The inner boundary of the accretion disk is determined by the radius of the minimum stable circular stable orbit around the black hole.

The expression for the radius is obtained from the General theory of relativity when considering the motion of a massive particle in a box hole. In the simplest case, the minimum radius stable circular orbit is three times the Schwarzschild radius. The latter defines the event horizon of a spherically symmetric black hole is an area that (in the classical case) can not leave any trapped particle.

In their study, the researchers tried to consider the real accretion disk around the black hole, which in the simple approximation described by hydrodynamic equations. Scientists have shown that in the case where the temperature of the liquid (and the corresponding heat energy) in the ring is small, the hydrodynamic description leads to the same results as the approach using particles. In the case where the fluid pressure is large, the stability of the orbit may be broken.