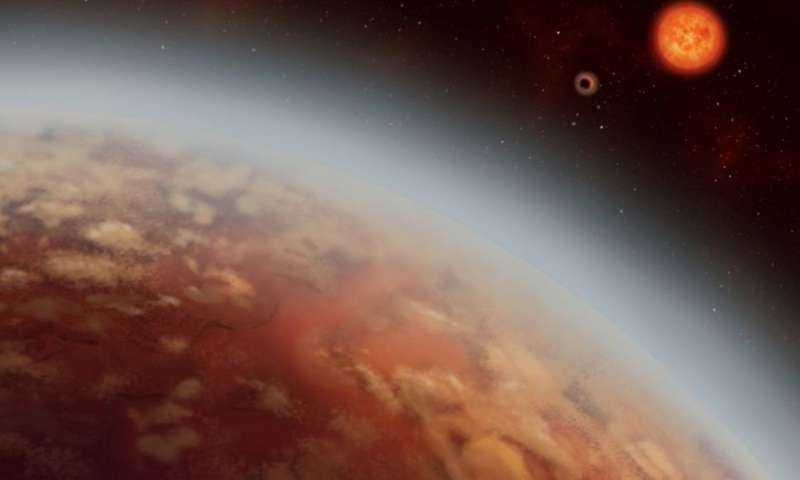 Having processed the data of the European Southern Observatory, an international group of astrophysicists found out that the exoplanet K2-18b can be super-earth – that is, its mass is no more than 10 times greater than the terrestrial. In addition, it turned out that K2-18b is not the only planet in the K2-18 system.

K2-18 is a red dwarf in 111 light years from Earth in the constellation of Leo. The first exoplanet, which revolves around it, was found in 2015; At the same time it was established that its orbit is in the inhabited zone, that is, at such a distance from the star, at which liquid water can exist on the planet. Scientists were able to establish this according to the HARPS measurements – a high-precision spectrograph mounted on a 3.6-meter telescope at the La Silva Observatory in Chile. HARPS measures the radial velocities of stars with great accuracy; the planets cause small fluctuations in radial velocity, over which astronomers detect their presence.

To determine whether K2-18b refers to stony planets or to gas giants, scientists needed to know its mass; knowing the mass and radius of the planet, which are calculated from the variations in the radial velocity of the star, scientists have established the density of the planet. The algorithms of machine learning dealt with the calculations; The results showed that K2-18b consists mainly of a dense substance. In other words, K2-18b is a stony planet with a gaseous atmosphere, like Earth, but only heavier or consists mainly of liquid water and covered with ice crust.

While scientists do not have enough data to recognize one of these options as final; to make additional measurements can telescope “James Webb”, the launch of which is planned for 2019, explained the lead author of the work of Ryan Cloutier (Ryan Cloutier) from the University of Montreal. A lot of specialists are dreaming of using the telescope devices, so the selection of applications for its operating hours will be very strict. Cloutier calculates that K2-18b will be considered a worthy candidate for further study, primarily because it is theoretically possible to study the composition of its atmosphere.

In addition, in the HARPS data on K2-18, Cloutier and his colleagues discovered an interesting anomaly; In addition to the signal with a period of 39 days caused by the rotation of K2-18b, another one with a shorter period of 9 days was detected; together with a team of researchers at the Astronomical Observatory of the University of Geneva, the University of Grenoble, Scarborough and Porto Cloutier established that the second signal gives the rotation of the second exoplanet of the K2-18-K2-18c system.

The orbit of K2-18c, most likely, is too close to its star, so that it can have liquid water. Otherwise, it probably resembles the Earth – it is, presumably, a rocky planet with a mass comparable to that of the earth.