Around the star nearest to us there can be planets 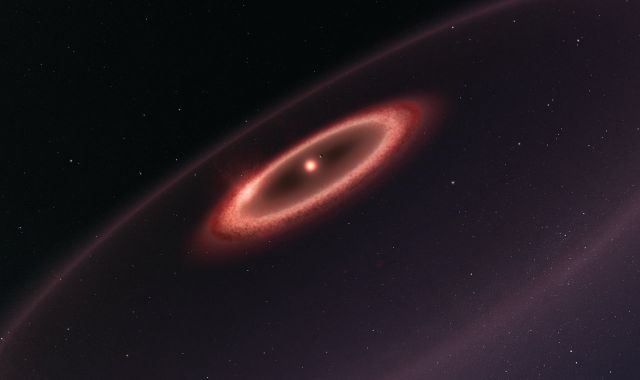 In the vicinity of the star of Proxima Centauri, nearest to the solar system, a dust ring was discovered. The discovery was made by the ALMA telescope in Chile.

The glow of cold dust was observed at a distance of one to four astronomical units from the star. Observational data indicate the possible existence of an even colder dust belt, and perhaps a multicomponent planetary system. In the solar system, there are similar structures of a much larger size; it is believed that such belts consist of stone and ice particles, which failed to condense into planets.

Proxima Centauri is the closest star to the Sun, a weak red dwarf, located just four light-years from us in the southern constellation Centaurus (Centaurus). Earlier, near her was found a planet similar to the size of the Earth Proxima b. It was discovered in 2016. This is the nearest exoplanet to us.

According to scientists, a new discovery indicates the existence of the nearest to the Sun star of a multicomponent planetary system, and not just a single planet.

Dust belts are the remains of a substance that does not condense into more massive bodies, such as planets. Dimensions of stone and ice particles in these belts can be different: from the smallest dust grains less than a millimeter in diameter to asteroids of many kilometers diameter.

Observations show that most of the dust is concentrated in the belt at a distance of several hundred million kilometers from Proxima and the same extent. The total dust mass in this belt is about one-hundredth of the Earth’s mass, and its temperature is estimated at -230 degrees Celsius, which is close to the temperature of the Kuiper belt in the solar system.

The data obtained at ALMA also suggests that there is another, even colder, dust belt around Proxima, ten times farther than the first. If this is so, then the nature of this belt, very cold and located far away from the colder and weaker than the Sun, is mysterious. Both belts are much farther from Proxima than the planet Proxima B, whose orbit is only four million kilometers away from the parent star.

The planetary system of Centaurus Proxima is of special interest also because there are plans for its direct study by microscopic probes, which will be accelerated using laser sails (the Starshot project). When planning this mission, information about the dust environment around the star will be very important.