Arrhythmic “heartbeat” of a black hole 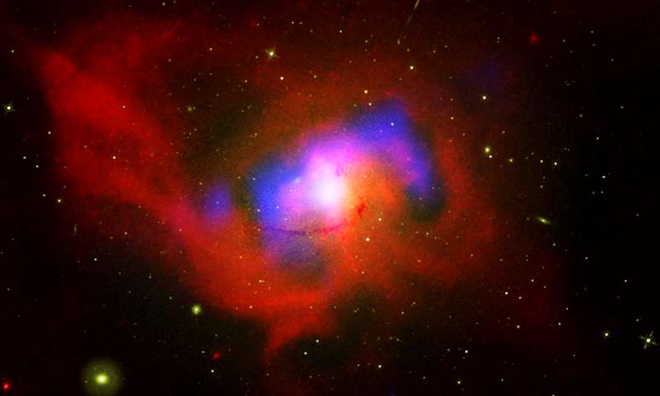 In the center of the galactic cluster of Centaurus there is a large elliptical galaxy called NGC 4696. Even deeper, in the nucleus of this galaxy, a supermassive black hole hides.

New data from the NASA X-ray Observatory Chandra and other telescopes revealed details of this giant black hole located about 145 million light-years from Earth. Although the hole itself is not fixed, astronomers study the effect it has on the galaxy in which it lives, and larger clusters around.

In a sense, the activity of this black hole resembles a heartbeat that pumps blood through the arteries. Similarly, it can inject material and energy into and out of its galaxy.

Studying the collected data, the researchers found evidence of repeated explosions of energetic particles in jets created by a supermassive black hole in the center of NGC 4696. These explosions create huge cavities in hot gas filling the space between galaxies, as well as shock waves similar to sound ones if through a cluster Flew high-speed aircraft.

This composite image includes the X-ray data of the Chandra (red) showing the hot gas in the cluster, the radio data of the array of Karl Jansky telescopes (blue) showing high-energy particles produced by the black hole, and galaxies and stars inside and outside the cluster (green) “Hubble.”

Astronomers used special processing of X-ray data to identify nine cavities visible in hot gas. These cavities on the additional image are designated from A to I, and in place of the black hole there is a cross. Cavities formed recently, are located closest to the black hole, in particular those that are signed A and B.

According to researchers, black hole explosions, or “beatings,” occur every 5-10 million years. In addition to significantly different time scales, these strokes also differ from typical human heartbeats in the absence of regular intervals.

Another type of X-ray data processing shows the sequence of curved parts in a hot gas at almost equal intervals. They can be caused by sound waves generated by repeated bursts of a black hole. In the cluster of galaxies, the hot gas that fills the cluster allows sound waves to propagate – albeit at too low frequencies, so that a person can hear and detect.

These details in the Centauri cluster are similar to the ripples visible in the cluster of Perseus galaxies. The sound level in the Centaur is extremely deep, which corresponds to a discordant sound of about 56 octaves in the middle of C. This is approximately one octave higher than the sound in Perseus. Alternative explanations for these curve details include the effects of turbulence or magnetic fields.

Areas with the greatest density of heavy elements are located to the right of the black hole. Their lower density near the hole agrees with the idea that the enriched gas was removed from the cluster center due to explosive activity. The energy produced by the black hole can prevent the cooling of a huge hot gas reservoir and the formation of a large number of stars in it.