As formed our Solar system? 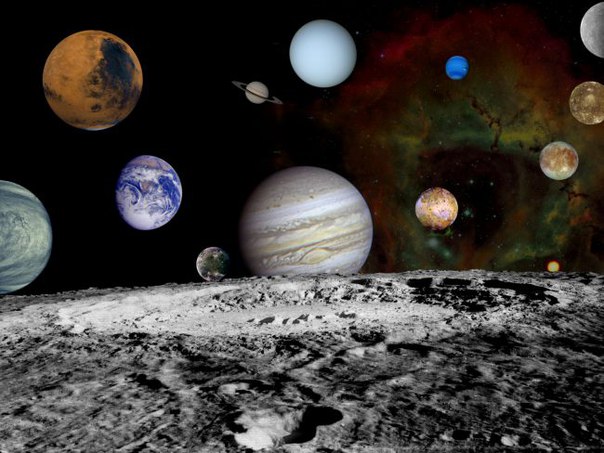 Since time immemorial humanity is trying to answer the question of how the universe began. However, to seriously engage this issue began only with the beginning of the scientific revolution, when the world was dominated by a theory, the evidence of which was carried out empirically. From that moment, the space between the 16th and 18th centuries, astronomers and physicists began to withdraw evidence-based explanation as to what started the life of our Sun, the planets and the entire Universe.

According to this model, the Sun and all the planets of our Solar system began its history with a giant molecular cloud of gas and dust. Then, about 4.47 billion years ago something happened that led to the collapse of the cloud. Perhaps the reason was the passing star or the blast waves of supernova, no one knows for sure, but the end result is a gravitational collapse in the center of the cloud.

From this moment, from clouds of gas and dust began to form denser clumps. Reaching a certain density, clumps according to the law of conservation of momentum began to turn, and the increasing pressure they were warmed up. Most of the matter gathered in the Central bundle, while the remaining matter formed around this clot ring. A clot in the center eventually became the Sun, and other matter have formed a protoplanetary disk.

The planets formed from matter of this disc. Attracted to each other particles of dust and gas gathered into a larger body. Near the Sun could be formed in more dense objects only the clots, which were present in the highest concentration of metals and silicates. So there was mercury, Venus, Earth and Mars. Since metal elements are poorly attended primary in the solar nebula, the planets could not grow very much.

In turn, such giant planets as Jupiter, Saturn, Uranus and Neptune, were formed already at the point between the orbits of Mars and Jupiter — where-that abroad low temperatures, where the material is frozen so that it allows volatile compounds to retain a solid form in the form of ice. The diversity of this ice were much wider variety than the metals and silicates that formed planets of the inner Solar system. This allowed them to grow so huge that eventually they have a whole atmosphere of hydrogen and helium. The remaining material that has not been used for the formation of planets, concentrated in other regions, forming eventually the asteroid belt, the Kuiper belt and the Oort cloud.

Over the next 50 million years, the pressure and density of hydrogen in the centre of the protostar become high enough to initiate the fusion reaction. Temperature, reaction rate, pressure, and density continued to increase until, until it was achieved hydrostatic equilibrium. From this point the Sun became a main sequence star. Solar wind created the heliosphere, smetov the remaining from the protoplanetary disk of gas and dust in interstellar space and marking the completion of the process of planetary formation.

The idea that the Solar system formed from a nebula, was invited in 1734 the Swedish scientist and theologian Emmanuel Swedenborg. Immanuel Kant, familiar with the work of Swedenborg, was engaged in the further development of the theory and published the results in his “universal natural history and theory of heaven in 1755. In it, he claimed that gas clouds (nebulae) rotate slowly, and gradually destroyed under the influence of gravity are compressed, forming stars and planets.

Similar but less detailed model of formation was proposed by Pierre-Simon Laplace and described in his work “exposition of the system of the world”, which was published in 1796. Laplace theorized on the topic that originally the Sun had an atmosphere, extended to the entire Solar system, and at some point it “protsvetanie cloud” began to cool and shrink. With the increase of the rotation speed of the cloud it threw out a superfluous matter, which has subsequently formed the planets.

Nebular model the Laplacian received wide recognition during the 19th century, although it contained some apparent inconsistencies. The main issue was caused by the angular distribution of the momentum between Sun and planets, which the nebular theory does not explain. In addition, the Scottish scientist James Clerk Maxwell (1831-1879) argued that the difference in rotation speed between the outer and inner part of the protoplanetary disk would not allow matter to accumulate. In addition, the theory was not accepted also by astronomer sir David Brewster (1781-1868), who once said:

“Those who believe that the nebular theory is correct, and believe that our Earth got its solid form and atmosphere from a ring thrown from the solar atmosphere, which was subsequently enclosed in a solid sphere terraquell likely to believe that the Moon was formed the same way. [If we consider from this point of view], on the moon, too, has to have water and its atmosphere”.

By the end of the 20th century, the Laplace model has lost confidence in the face of scientists and forced the latter to search for new theories. It began, however, not earlier than the end of the 60-ies, when there were the most modern and most widely recognized variant of the nebular hypothesis — solar nebular disk. The credit belongs to the Soviet astronomer Victor Safronov and his book “Evolution doplnena clouds and the formation of the Earth and planets” (1969). This book describes practically all basic questions and riddles of the process of planetary formation, and most importantly — the answers to these questions and riddles clearly articulated.

For example, doplnena cloud model successfully explains the appearance of accretion disks around young stellar objects. Multiple simulations have also shown that accretion of matter in these disks leads to the formation of several bodies the size of the Earth. Thanks to the book Safronova question of the origin of the terrestrial planets (earth-like or, if you want) can be considered solved.

Despite the fact that initially, the model doplnena cloud was used only in relation to the Solar system, many theorists believe that it can be used as a universal system of measures for the whole Universe. Therefore, it is even now often use to explain the process of formation many of the exoplanets that were found by us.

The shortcomings of the theory
Despite the fact that the nebular model has been widely recognized, it still contains a number of questions that cannot be solved even modern astronomers. For example, there is an issue with the slope. According to the nebular theory, all planets that are around stars, must possess the same axial inclination relative to the Ecliptic plane. But we know that the planets of the inner and outer circles have different inclinations to the axes.

While the planets of the inner circle have an angle of inclination of the axes ranging from 0 degrees, the axis of the other (Earth and Mars, for example) have an angle of about 23,4 ° and 25°, respectively. The planet’s outer circle, in turn, also have different orientation axes. The axial tilt of Jupiter, for example, is 3.13 degrees, while Saturn and Neptune, the figures are 26,73 and 28.32 degrees, respectively. And Uranium generally has an extreme tilt of axis in degrees 97,77 that actually makes one of its poles constantly be facing the Sun.

In addition, the study of planets outside the Solar system has allowed scientists to note inconsistencies, which cast doubt on the nebular hypothesis. Some of these inconsistencies are associated with a class of planets known as “hot Jupiters” whose orbit close to their stars, and a period of several days. Astronomers have adjusted some aspects of the hypothesis to solve these issues, but all problems is not solved.

Most likely, the unanswered questions have the most close value to understanding the nature of the formation, and therefore so difficult to answer. Just when we think we’ve found the most compelling and logical explanation, there are always moments that explain we not able. Nevertheless, we have come a long way, until we came to our current models of star formation and planetary formation. The more we learn about the nearby star systems and more than explore space, the more Mature and sophisticated our models become.