As planet X tips the Sun and causes disasters on Earth 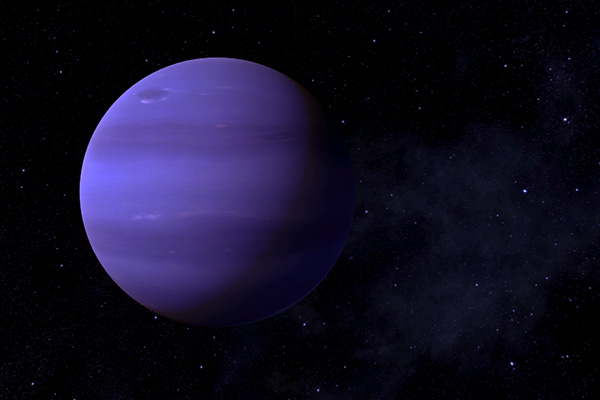 On the possible existence of a ninth planet of the Solar system became known in January 2016. With the Planet X link the inclination of the rotation axis of the Sun, the destruction of the planetary system and the occurrence of disasters on Earth. At the same time, scientists have progressed in understanding the role of this heavenly body in the Solar system, modeled its internal structure, and proposed hypotheses for explaining the origin of Planet X. “Tape.<url> tells about the latest research.

On the possible discovery beyond the orbit of Pluto of Planet X was announced by astronomers Mike brown and Konstantin Batygin of Caltech in Pasadena (USA). Likely the ninth planet of the Solar system is about ten times heavier than Earth and rotates around the sun in an elongated orbit (and inclined relative to Earth’s orbit plane) with a period of 15 thousand years. The physical and chemical properties, it resembles the ice giants Uranus and Neptune. As suggested by brown and Batygin, the space object 4.5 billion years ago was knocked out of the protoplanetary disk near the Sun.

The closest distance from the Sun is 200 astronomical units (that’s seven times more than from the Sun to Neptune). The maximum distance of Planet X is estimated at 600-1200 astronomical units, which puts its orbit beyond the Kuiper belt where Pluto is located. The probability of error, brown & Batygin estimated at 0,007%. New planet scientists have discovered, analyzing exerted on other celestial bodies gravitational pull.

Astronomers Esther Linder and Christoph mordasini from the University of Bern (Switzerland) came to the following conclusions about the physico-chemical properties of this celestial body. Radius 3.7 times larger than Earth. The temperature of the atmosphere, composed of hydrogen and helium, minus 226 degrees Celsius. The gas shell — a layer of water ice with a temperature of minus 63 degrees Celsius. Deeper, thin layer of silicate mantle beneath the iron core. Its temperature is estimated at 3.4 thousand degrees Celsius. According to astronomers, planet X emits about a thousand times more energy than it absorbs, and gradually cooled. Scientists believe that planet X is a reduced copy of the gas giants Uranus and Neptune. 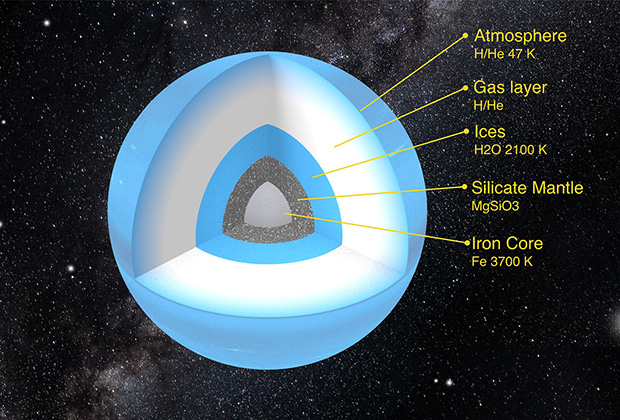 A possible structure of the Planet X

American colleagues of astronomers believe that the color of Planet X — dark blue, darker Neptune, which in the optical range has a dark blue hue, and Uranium, with its light blue gas shell. Since the temperature of the Planet X is extremely low, gaseous methane in the atmosphere is practically absent, in contrast to the gas envelope of Neptune. This connection, according to scientists, condenseries and is located at the base of the planet’s atmosphere or clouds.

If brown and Batygin believe that planet X has been knocked out of the protoplanetary disk near the Sun, their colleagues from Sweden and France think differently: a celestial body may be the exoplanet, the Sun, captured from neighboring stars. In their work, the researchers considered a scenario in which planet X was captured by the Sun from the other stars in its birth cluster. The sun was located in the group of several thousand young stars, and between low speed (kilometer / second) moved the planet. 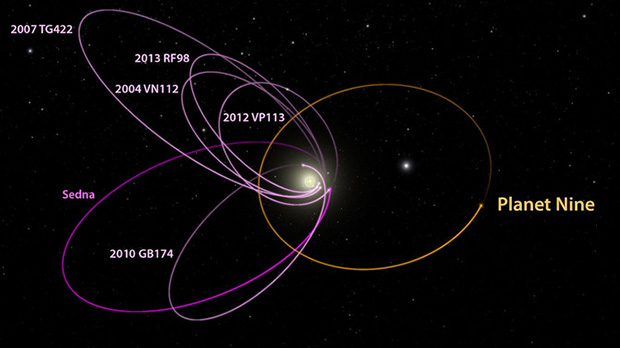 The orbit of Planet X (marked in yellow)

This requires the simultaneous fulfillment of three conditions. First, capture by the Sun of Planet X would occur at a distance of about 150 astronomical units from it (to avoid perturbations from the Kuiper belt). Secondly, the exoplanet had to rotate around another star in the cluster at a great distance from it (from a hundred astronomical units). This would allow the Sun to overcome the impact on the Planet X of its first star. The third condition is that after the capture by the Sun of the exoplanet is possible to play back the current dynamic configuration of the Solar system. In conducted in the framework of the problem of N bodies simulation of astronomers has shown that all three conditions may occur.

Astronomers believe that the phase of a cluster lasts about one hundred million years, and that is enough for distribution and remote from massive bodies of the planets (like Neptune) between the heavy stars. Similarly, you can explain the nature of many TRANS-Neptunian objects in the Kuiper belt, located at a distance of from 30 to 55 astronomical units from the Sun.

Planet X, according to Spanish and British astronomers, is able to perturb the orbits of celestial bodies in the Solar system and throw them out of it. The researchers analyzed the impact of Planet X on the movement of six extreme objects beyond the orbit of Neptune, the semimajor axis of the orbit exceeding 150 astronomical units and a perihelion — 30 astronomical units.

Simulations showed that the orbit of the dwarf planet candidate Sedna and 2012 VP113 will remain in stable condition over the next few hundred million years. On the other hand, the trajectory of TRANS-Neptunian objects VN112 2004, 2007 and 2013 TG422 RF98 (the diameter of these heavenly bodies reach 100-300 km) is unstable and a few tens of millions of years they can be thrown out the Planet X of the Solar system.

Also the influence of Planet X French and Brazilian astronomers explained the inclination of the Laplace plane of the Solar system. The researchers examined the dynamics of four giant planets — Jupiter, Saturn, Uranus and Neptune. Each of these heavenly bodies affect the total vector angular momentum of the Solar system perpendicular to the plane of Laplace. Astronomers have studied the effects of Planet X the Sun and the giant planets. It turned out that this effect explains the tilt of six degrees between the plane and the Laplace plane of the solar equator.

The analytical model describes the amount of tilt depending on the mass, eccentricity (parameter of elongation of the orbit), semimajor axis of the orbit of Planet X and the characteristics of giants. A few days before the publication of this discovery, the similar conclusions presented in collaboration with the discoverers of a Planet X astronomer Elizabeth Bailey. 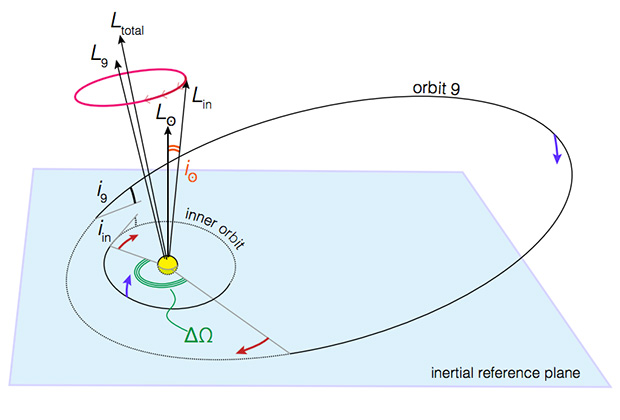 The model of the motion of the Sun

Some scientists have ventured on more daring hypotheses. Astrophysics Daniel Vitmaiyer and John Matese from the United States has accused Planet X in the mass extinction of animals on Earth, occurring every 27 million years. The theory is based on the fact that the orbit of Planet X around the Sun is tilted slowly, and every 27 million years crosses the Kuiper belt (located at a distance of from 30 to 55 astronomical units from the Sun). This leads to gravitational perturbations, and the planet X pushes the comet from the Kuiper belt into the Solar system. Those bombard planets (including the Earth). As you get closer to the Sun, they break into fragments, impeding the access of sunlight to the heavenly bodies (including Earth).

According to scientists, this scenario is most suitable for space explanation for the mass extinction of animals. Two other scenarios — the presence of a second star near the Sun and the vertical oscillations of the lights as it rotates around the center of the galaxy, as the authors note, do not get paleontological confirmation. For the first time his hypothesis Vitmaiyer and mats offered in 1985. Their study was published in the journal Nature and the publication of a Time (picture on cover). According to the initial hypothesis of scientists, planet X is one to five times heavier than Earth and located in a hundred times farther from the Sun.

Astronomers Carlos and Raul de La Fuente Marcos believe that beyond the orbit of Pluto is located not one, but two super-earths. Available data on the precession of the perihelion of Sedna, 148209, 2004 VN112, 2007 TG422, 2010 GB174, 2012 VP113 and 2013 RF98 get, according to the authors, a good explanation if to assume the presence of at least two giant celestial bodies, which could be planet X. the possibility of the existence beyond Pluto two supertall Carlos and Raul de La Fuente Marcos say from 2014.

All the conclusions about the Planet X is not based on direct observations and on the analysis of the exerted impact on other celestial bodies, and computer simulation data. According to astronomers, for the immediate opening of Planet X, it is sufficient for 20 days of observation on the Japanese Subaru Observatory in Hawaii (USA). Scientists hope to reserve time at the Observatory. Then, according to brown and batygina, the existence of Planet X is finally proven.