As the ocean under the surface of Europe sounds 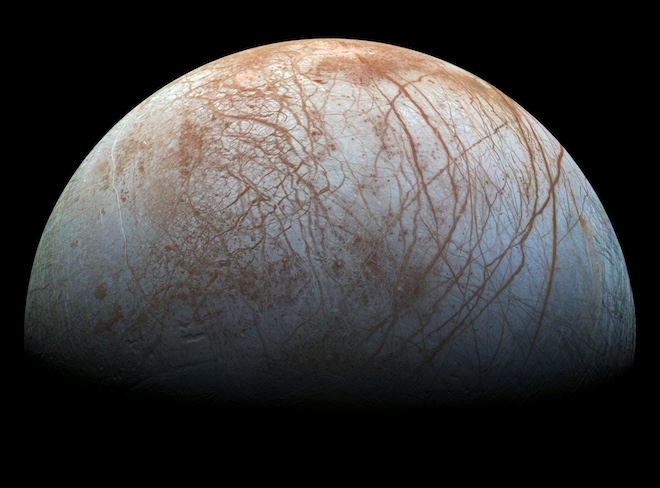 It appears, the huge ocean under the surface of Europe (the satellite of Jupiter) — quite noisy place. According to Mark Panninga from University of Florida, a crack and sliding under an ice jacket on which, as well as to all Europe, a gravitation of Jupiter exerts impact create the “seismic rumble” penetrating all ocean. Having watched video, you can gain an impression about this ambient noise — it was made on the basis of simulation of Panninga and his colleagues.

Of course, it is not that sound which you would hear, having plunged into cold waters of Europe. The Panning and its command took the three-hour segment of data from seismic simulation containing information at a frequency up to 2 Hertzes (frequencies below people can’t hear). They squeezed these data in a roller 20 seconds long and brought frequencies to the heard range. Besides, this simulation doesn’t represent the broad picture of a sound landscape of Europe — it doesn’t include data on turbulence of water which are an important source of an ambient noise of the earth ocean.

The last several years of NASA develop a mission of a flight of Europe which will shall research the ocean of the moon with a diameter of 3100 km, and also its ability to support life. During the mission it is planned to realize tens of convergence with the moon. Project participants work on readiness of the probe for start in 2022. However at the end of last year the Congress allowed the instruction to turn on the landing module in a mission. NASA studies possible ways now to realize this task, however so far everything specifies that there will be two starts: one for the module and one — for the probe.

According to David Senske from Laboratory of jet propulsion of NASA, the landing module, in fact, will have the mission. The Panning, in turn, hopes that on it the seismic equipment which will allow scientists to understand an inner pattern of Europe better will be set. Here its research can be used: the detail pattern of an ambient noise of the ocean can help scientists to create the suitable seismic equipment and even to decide on the place of fit of the module.