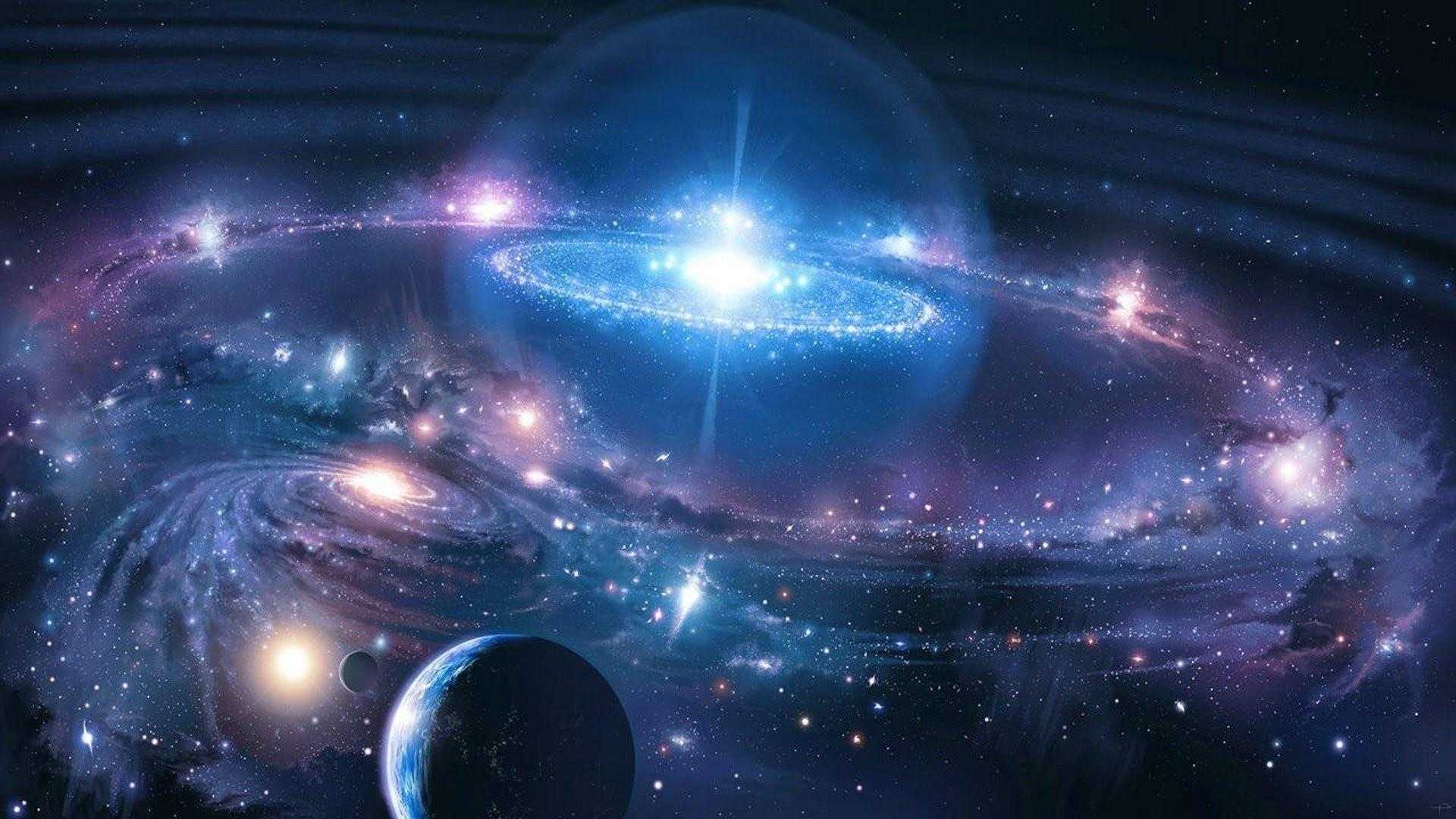 It would seem that the modern understanding of the device of the universe has already settled and is generally recognized. But from time to time it has to be protected from so-called anomalies, inexplicable deviations from the norm, which put the standard model in doubt. We will tell you today how a strange cosmological phenomenon, in its nature and some coincidence, was called “Axis of Evil”, almost broke modern cosmology.

Echo of the Big Bang

The Earth looks to the sky with thousands of eye-telescopes. A few dozen are placed in orbit. The first telescopes were optical and intended to observe the light part of the spectrum of electromagnetic radiation, which is accessible to the human eye. Modern ones are peering into the bottomless cosmic space and observing its objects in the whole spectrum of electromagnetic radiation. For example, space observatory Swift. It is designed to record and observe cosmic gamma-ray bursts – gigantic energy emissions observed in distant galaxies. The location of short-wave gamma radiation at the very beginning of the electromagnetic spectrum. The Russian orbital observatory “Radioastron” studies black holes and neutron stars in the radio range, closer to the other end of the spectrum.

Some orbital observatories are known more, some less. Topping the popularity rating is the Hubble Space Telescope, which has been in orbit for 27 years. He studies space in the visible, ultraviolet and infrared ranges. Kepler is also widely known, equipped with an ultra-sensitive photometer operating in the 430-890 nm range (visible and infrared ranges) and capable of simultaneously observing a brightness fluctuation of 145,000 stars.

But there are among them orbital observatories, the main purpose of which is not individual stars, planets or galaxies, but the universe itself. The purpose of their location in orbit is to help astronomers understand the structure of our universe, to try to understand its history. And perhaps, and see through the wall of incredible distances and other universes.

Launched by NASA in June 2001, the observatory WMAP (Wilkinson Microwave Anisotropy Probe) was just such. The device was intended for studying background background radiation, which was formed as a result of the Big Bang. Until October 2010, it was 1.5 million km from Earth in orbit near the Lagrange point L2 of the Sun-Earth system. In the period from 2001 to 2009, he scanned the celestial sphere and transmitted the results of observations to Earth. Based on the data obtained by the telescope, a detailed radio sky map was compiled at several wavelengths of electromagnetic waves: from 1.4 cm to 3 mm, which corresponds to the microwave range.

Relic radiation fills the Universe evenly. This background microwave radiation, which originated in the era of primary hydrogen recombination, is a kind of “echo” of the Big Bang. It has a high degree of isotropy, that is, uniformity in all directions. Its emission spectrum corresponds to the emission spectrum of an absolutely black body with a temperature of 2.72548 ± 0.00057 K. The maximum of radiation is accounted for by electromagnetic waves 1.9 mm in length and at a frequency of 160.4 GHz, (microwave radiation). Without going into details, on the scale of electromagnetic radiation it is between thermal infrared radiation and the frequencies of cellular communication, radio and television broadcasting. The microwave background radiation is isotropic with an accuracy of 0.01%. This is exactly what the alternating “warm” orange and “cold” blue areas on the radio cards of space vehicles say. It has some anisotropy on a small scale.

In 2010, the observatory finished its mission. Just as once WMAP replaced at its post space observatory COBE (Cosmic Background Explorer), also known as Explorer 66, and it was replaced by a more sensitive and modern European observatory Planck (Planck), located at the same point L2 . Planck has a higher sensitivity and operates with a wider frequency range. 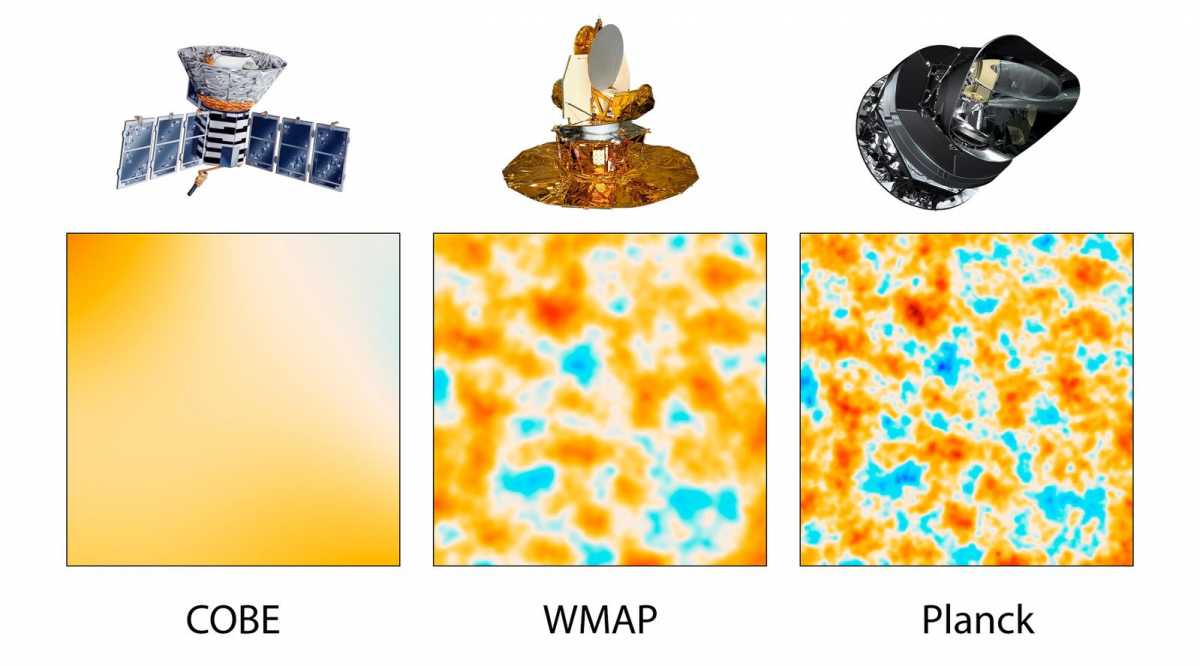 Comparison of results from COBE, WMAP and Planck. An illustration of how different is the sensitivity of their measuring instruments. / © wikipedia.org

Pierced by an axis

The basic position of modern cosmology, on which the majority of modern models of the universe is based, is the so-called cosmological principle. According to him, at the same time each observer, wherever he is and in what direction he is looking, will find in the universe on the average the same picture.

All would be fine, but only during the processing of data obtained by the WMAP probe, conclusions were drawn just about such anisotropy of the universe. The results of the analysis of the data indicated the presence in space of a certain extended region, around which the orientation of the entire structure of the universe takes place. That is, in space there is still a direction in which galaxies and large space objects are built. This phenomenon, capable of breaking the modern view of the universe, and was called the “Axis of Evil.” The term itself was introduced by the Portuguese physicist and cosmologist João Magueijo, who works in the UK. 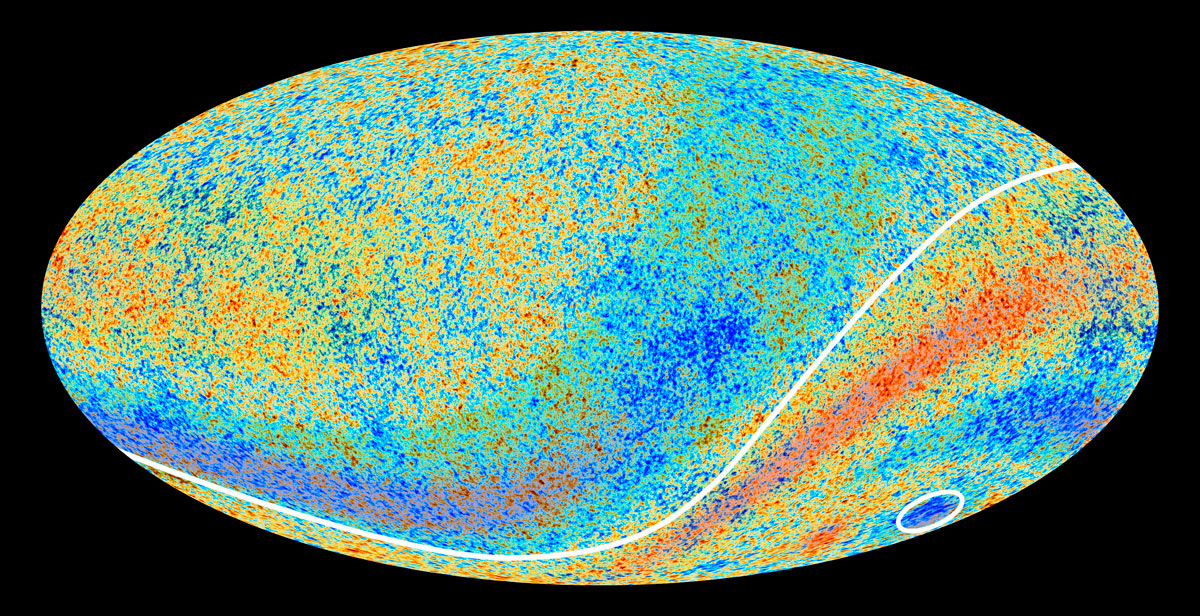 Blue areas are the most “cold”, orange – “warm”. The white line is the Axis of Evil. It is surrounded by an oval – Supershot Eridani. / © wikipedia.org

Such a name, it is believed, is associated not so much with the “geometry” of the phenomenon as with the influence that the phenomenon can have on modern established ideas about the universe. Among other things, a few years before, US President George W. Bush had introduced the same term in relation to countries that, according to the US, sponsored international terrorism and pose a threat to peace and stability on the planet.

It is worth noting that our Universe possesses some inhomogeneity and anisotropy. Otherwise, there would be no galaxies, no stars, no planets. And, in the end, you and me, too. All this is a deviation from the homogeneity of the universe. The cosmological principle is applied to very large scales, much larger than the size of the cluster of galaxies. It’s about hundreds of millions of light years. On a smaller scale, the inhomogeneity is possible as a consequence of the quantum fluctuations caused by the Big Bang.

Mageiju, observing the “warm” (orange) and “cold” (blue) areas of fluctuations in microwave background radiation, made an interesting discovery. He established that, on the largest scale, the fluctuations in the relic radiation (temperature fluctuations) are not randomly arranged, but rather ordered.

A separate example of such anisotropy is the relic cold spot in the constellation Eridan. Here, the microwave radiation is much lower than in the surrounding areas. The component of almost a billion light years in the diameter of Superspot Eridani has much fewer stars, gas and galaxies than usual.

A clear understanding of what could have caused such a gaping hole is now gone. Professor Laura Mersini-Houghton of the University of North Carolina gives this her own, exciting, explanation: “This is definitely the imprint of another universe outside of our own.”

And in 2009 ESA put into orbit a more perfect “Plank” telescope. The spacecraft had two instruments for studying the sky: a low-frequency receiver covering the frequency range from 30 to 70 GHz, which corresponds to waves of about 4 to 10 mm in length, and a high-frequency receiver with a frequency of 100 to 857 GHz and a wavelength of 0, 35 to 1 mm. The collected radiation on the instruments is focused by a system of two mirrors-the main one, 1.9 by 1.5 m in size, and the secondary one, whose size is 1.1 by 1.0 m. The telescope receivers were cooled to almost absolute zero, operating at -273 , 05 ° C, that is 0.1 ° C above absolute zero. The observation of the sky “Planck” continued until the exhaustion in January 2012 of liquid helium cooling receivers. 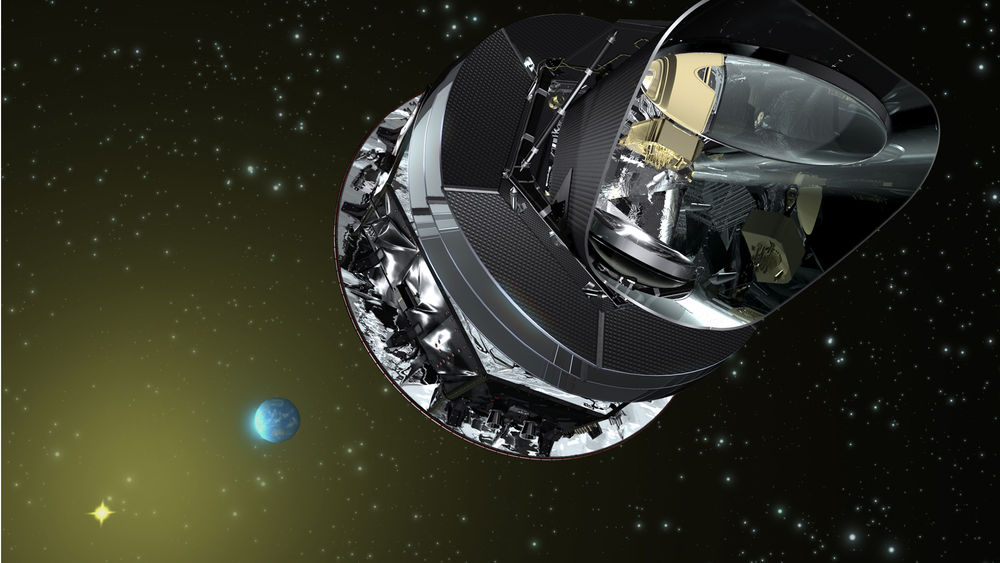 The Planck telescope at the Lagrangian point L2 of the Sun-Earth system / © popsci.com

He had to refute the results obtained by WMAP, or, on the contrary, confirm them. And the first analysis of the data obtained in 2013 showed that the “Axis of Evil” in the universe really exists. But at that time all the data received by the space vehicle had not yet been published.

And only last year, based on the results of the analysis of the complete set of data from the telescope, a team of researchers from University College London (UCL) and Imperial College London (Imperial College London) found that in fact, no “axis” does not exist. The data received from the telescope in the period from 2009 to 2013 were analyzed using a supercomputer. The results of the analysis showed: The universe is isotropic. A study of British astronomers was published in May 2016 by the journal Physical Review Letters.

Daniela Saadeh, a cosmology researcher from the Department of Physics and Astronomy of University College London, who took part in the study, does not hide her joy: “We can say that we saved cosmology from a complete revision.”

In an explanation of the results of the study, posted on the college’s website, Daniela explains: “The results of the study are the best proof that the universe is the same in all directions. Our current understanding of the structure of the universe is based on the assumption that it does not prefer one direction to another. But we must understand that Einstein’s theory of relativity does not in principle deny the possibility of the existence of an unbalanced space. Universes that rotate or stretch may well exist, so it is very important that in our case this is not so. Although, of course, we can not completely rule it out, but our calculations show that the probability of this is only one to 121,000. ” 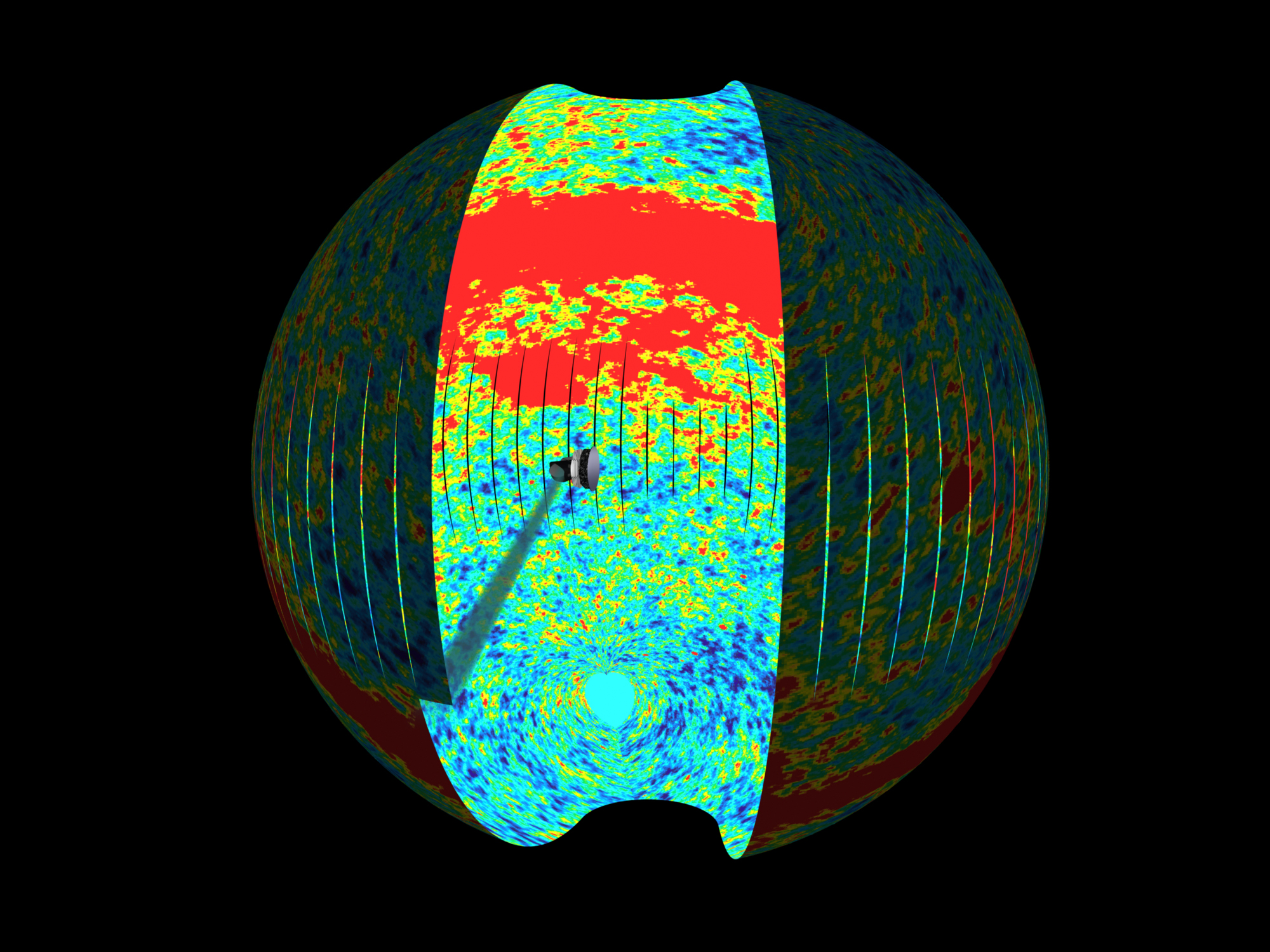 Scanning the celestial sphere with the “Planck” telescope / © esa.int