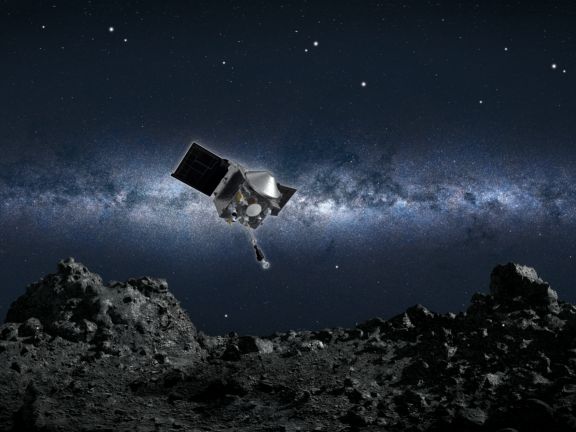 Scientists have published six papers at once, devoted to the latest observations of the OSIRIS-REx spacecraft behind the asteroid Bennu. The most important discovery was the presence on Bennu of bright veins ranging from 3 to 15 centimeters thick and up to a meter long. Using a spectrometer, the researchers determined that they are composed of carbonates such as calcite, magnesite, dolomite, and breunerite.

“We assume that these are carbonate deposits similar to those found in chondrites exposed to water. If this is true, then this means that for many thousands or even millions of years, streams of liquid water flowed on the surface of the progenitor Bennu, “the researchers write.

“We would never have seen these things with earthly telescopes. What we found was a surprise and, in turn, changes our understanding of what happened on the asteroid. ”- Hannah Kaplan, planetary scientist on the OSIRIS-REx team and co-author of two of the six published research papers.

The new results suggest that at the dawn of the solar system, Bennu was part of a much larger object that could be up to 100 kilometers across. Streams of water flowed abundantly on this space body, seeping into the surface cracks of the asteroid and leaving a sediment of carbonates.

Spectroscopic observations also revealed that 98 percent of Bennu’s surface is covered in what Kaplan calls “organic debris.” It is a messy mixture of molecules containing carbon, sulfur, oxygen and other elements.

Scientists have found that this organic (carbon-rich) soot lies more densely in certain areas, which they interpret as evidence of relatively recent space weathering.

NASA is planning a ground sampling operation from Bennu on October 20. OSIRIS-REx should leave its 700-meter working orbit and approach the asteroid at a distance of 54 meters. Then the station will blow the surface with a jet of compressed nitrogen from a cylinder, after which it will capture dust and small stones. If the mass of the collected material is less than 60 grams, the spacecraft will repeat the maneuver in January 2021.

The station is expected to leave the asteroid in March 2021, after which it will head towards Earth. Samples from Bennu should reach our planet in September 2023.

The asteroid Bennu, about 600 meters in diameter, was discovered in 2013. To study this object in September 2016, NASA launched the OSIRIS-REx interplanetary station to it. The station entered the orbit of the asteroid on December 31, 2018.