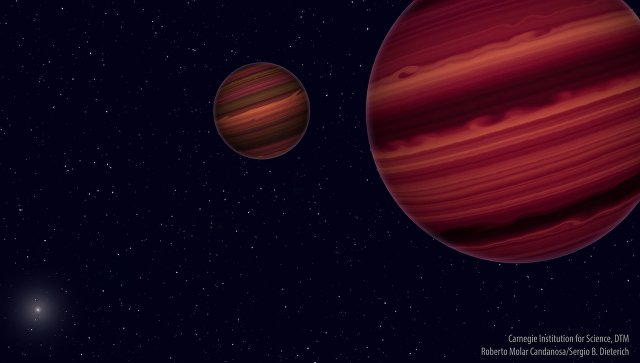 The discovery of two unusually large brown dwarfs, “failed” luminaries, made astronomers from the United States think that the concept of “star” needs a new definition. Their findings were presented in the Astrophysical Journal.

“Our observations show that the concepts of” brown dwarf “and” star “need to be revised.It turns out that the heaviest failed luminaries and the smallest stars are almost not dissimilar in mass, despite this, they develop quite differently – the first quickly fade , while the latter shine for billions of years, “said Serge Dietrich of the Carnegie Science Institute in Washington, DC.
Was there a star?

All the stars of the Milky Way and other galaxies are born inside especially dense clouds from gas, some of which at a certain point in time thickens and begins to thicken. Over time, the temperatures and pressures inside these growing clusters grow to such high values ​​that in their center thermonuclear reactions between individual hydrogen atoms begin to occur.

Such reactions, as shown by calculations of astrophysicists, can occur only within sufficiently large objects, whose mass is about 7% of the solar, which is 73 times the mass of Jupiter. Less large celestial bodies turn into brown dwarfs – “failed stars”, slightly glowing in the infrared range and gradually fading.

In recent years, scientists have discovered a number of unusual features of brown dwarfs – the presence of weather on them, metal “clouds” and a number of other properties that have led many astronomers to believe that they are in fact very large planets, not stars. Such discoveries have revived controversies about where the boundary between luminaries, brown dwarfs and planets lies.

Dietrich and his colleagues discovered two objects that did not fit into the generally accepted definitions of stars and brown dwarfs, studying a pair of the nearest to us large brown dwarfs revolving around the star Epsilon (GJ 845) in the constellation of the Indian.

Both of these facilities were opened in 2003, as their large size allowed astronomers to see both of them directly, using a number of ground and orbital telescopes. For a long time they were considered large, but quite ordinary “failed stars” – their mass, according to old estimates, exceeded Jovian by 50 and 28 times, and the temperature was impressive, but “normal” 700-1100 degrees Celsius.
Space luck

The authors of the article tried to clarify these values, observing how quickly all three inhabitants of the system move around each other, and at what points they are during the maximum deletions and closings. To do this, they used a VLT telescope and several other powerful ground-based observatories.

When scientists analyzed the new data, they were surprised to find that the mass of brown dwarfs in the Epsilon Indian system was significantly understated – in reality they were 75 and 70 times larger than Jupiter.

Such heavy objects, as predicted by the classical theory of star formation, must either be stars, or be on the verge of becoming a “full” star and have a number of unusual properties. In reality, brown dwarfs from the Epsilon of the Indian look quite ordinary and do not have abnormally high temperatures and other features uncharacteristic for celestial bodies of this type.

On the other hand, in recent years astronomers have discovered stars, such as EBLM J0555-57Ab, whose mass is not much higher than that of dwarfs in the Epsilon of the Indian. For some reason, they were able to become full-fledged luminaries, while the companions of GJ 845 failed to do this.

All this, as the researchers note, indicates that the mass of the future star or brown dwarf can not be used as the main criterion for determining what exactly is a particular space object. Other factors, for example, the structure of the depths of such “embryos” of stars or their composition, can affect the fate of such objects no less than their mass, scientists conclude.