Astronomers described the most powerful explosion in the observed universe 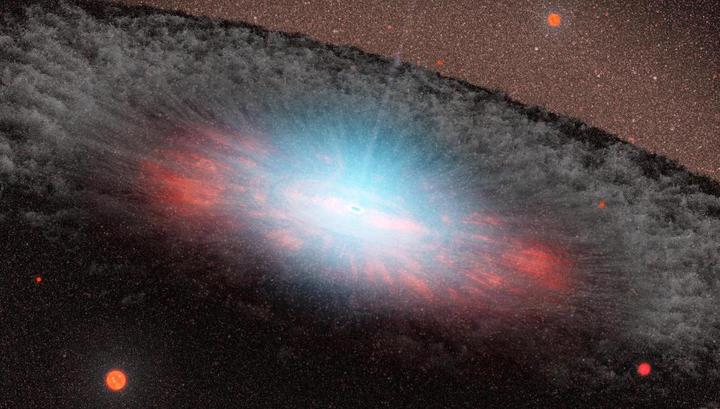 In an article published in the journal Nature Astronomy, a large group of astronomers, including specialists from Finland, Sweden, Ireland, Italy, Spain, Chile and the US, reported on the observation of a flash with an energy release of 2.3 × 1052 erg. The authors call it record for the whole history of observations and conclude that such power can not be explained by known processes. They offer their own model, based on the interaction of a shock wave with a dense interstellar medium.

Cataclysms that can turn whole planetary systems into a red-hot gas with their population, astronomers call melancholically “transitional processes”. This name is intended to distinguish catastrophes lasting from a few seconds to several years from the constant work of grandiose space “fixtures”, such as quasars.

The most impressive of such short-term “cosmic fireworks” that have already received their explanations are record supernovae, which are 10-100 times brighter than typical ones, and the destruction of stars by black holes. But sometimes even more powerful flares occur in the central regions of distant galaxies, the conventional model of which is not yet built.

The outbreak of the PS1-10adi in the galaxy, located 2.4 billion light-years from the Earth, was discovered on August 15, 2010 using the Pan-STARRS telescope system. The researchers calculated that the total energy released was 2.3 × 1052 erg. According to the authors, this is a record: such powerful flares have not yet been observed.

Scientists have considered two possible scenarios of such a flare from the number already known to astronomers: the variability of the radiation of the active galactic nucleus and the rupture of the star by a supermassive black hole. None of them, according to experts, is consistent with the observed spectrum of the outbreak.

In addition, the radiation of the active nucleus usually changes only a few tenths of a fraction, and quickly and accidentally. Meanwhile, the brightness of PS1-10adi gradually decreased for three years, and only after that it “drowned” in the radiation of the parent galaxy.

The brightness of the flash, observed when the star is “eaten up” by a black hole, also usually falls much faster than the PS1-10adi. Here, however, options are possible. But, even if we neglect the difference in the light curves, the problems with the spectrum will not disappear anywhere.

The authors put forward their own version of this mysterious cataclysm. They believe that the matter is in the interaction of a powerful shock wave with a dense interstellar medium. This process could generate radiation with a similar spectrum.

Where did this wave come from? It could cause that very rupture of the star by gravitational forces. After all, only a small part of the substance of the star immediately falls into a black hole. Huge masses of gas, pushed by powerful radiation, rush into space at a speed of thousands of kilometers per second. Here is the shock wave.

In addition, such a wave, according to the calculations of the authors, could be generated by the explosion of a supernova in a particularly dense medium, characteristic of the central regions of galaxies.

By the way, researchers believe that such a cataclysm is not unique. Rummaging through the databases, they found several more outbreaks with similar spectra. They did not pay attention to them at the time, because they were very far flashes. The distance prevented astronomers from adequately assessing the scale of the phenomenon, and the events detected were attributed to the usual activity of the galactic nucleus.

Of course, in order to finally establish the nature of such cosmic catastrophes, additional observations are required. The authors have high hopes for the grandiose telescope ELT under construction. In the nuclei of galaxies, located in billions of light years from the Earth, he will be able to see the details of a size of only a few light years. And then, probably, there will be answers to many questions.