Astronomers for the first time accurately measured the size of a black hole in the center of the galaxy. 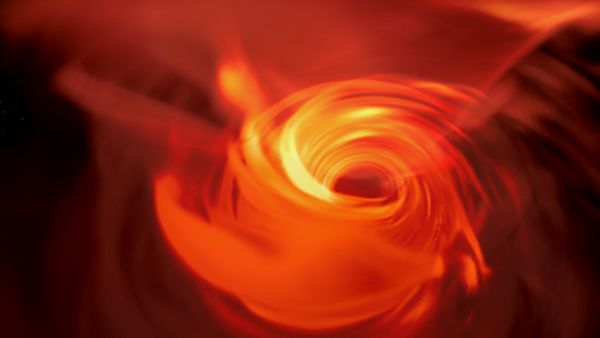 Combining the capacities of the world’s largest radio observatories helped scientists for the first time obtain specific data on the size of the “visible part” of a giant black hole in the center of the Milky Way, according to an article published in the Astrophysical Journal.

Most astronomers believe that in the center of all galaxies are supermassive black holes – objects weighing millions and billions of suns, continuously absorbing matter. Partially a black hole throws it back in the form of jets — thin plasma beams accelerated to near-light speeds.

The Russian space-based observatory Radioastron was able to look inside the BL galaxy core in the Lizard constellation and get record-breaking detailed images of the jet’s legs — a narrow beam of matter spat out by a supermassive black hole in its center.

In the Milky Way (and some other galaxies), the black hole is hibernating, so it does not have large and visible jets. Scientists have long been trying to figure out when she fell asleep, how active she was and how this activity affected the stars in the center and on the outskirts of the Galaxy.

Sarah Issaun from the University of Nijmegen (the Netherlands) and her colleagues have been watching Sgr A * for many years, a black hole in the center of the Milky Way, using a GMVA microwave interferometer – a virtual radio telescope. Within its framework, the capacities of the most sensitive ground-based millimeter-wave radio telescopes in Chile, the USA, Spain, Germany and a number of other countries were combined.

GMVA acts as an analogue of another well-known project – Event Horizon Telescope, but in this case, scientists are watching Sgr A * on a different set of frequencies. This will allow to study it in more detail and understand how radiation is born in the surroundings invisible to the EHT.

Combining several of the world’s largest radio telescopes into a giant virtual “plate” allowed astrophysicists to look into the very center of the Milky Way and study in detail the structure of the environment of a supermassive black hole inhabiting it, coming close to its event horizon.

A year ago, the participants of the EHT project received the first images of the zone where the black hole radiation is born, and revealed some of its unexpected features, including the assumed asymmetry. This spurred astrophysicist interest in Sgr A * and made it possible to get even more detailed “eyes” of the black hole with GMVA.

Scientists managed to double the resolution and clear the data from interference caused by the dispersion of radio waves inside dense clouds of interstellar gas and dust covering the center of the Galaxy from observers’ gaze on Earth.

These data unexpectedly showed that the visible part of Sgr A * was not only asymmetric, but also very small in size. Such a discovery contradicts today’s popular theory that almost all of the visible radiation produced by supermassive black holes is born inside jets.

“This may indicate that its radio wave radiation is not generated inside the jet, but in a disk of gas and dust surrounding the hole. No other object behaves in this way. An alternative explanation is that its emissions are directed directly at us,” says Issaun.

As far as it is possible, astrophysicists cannot yet say, but they are inclined in favor of the fact that black hole ejections can in fact be directed towards the Earth. In the past, as Issaun noted, such a coincidence seemed implausible, but the observations of both the EHT and GMVA quite clearly speak in favor of this scenario.

Scientists hope that the final answer to this riddle will be found in the near future, when astronomers complete the processing of the last portion of data from the EHT. The new, more detailed pictures, cleared of interference in a similar way, will precisely indicate where the black hole jet is looking and whether it has any at all, concludes the astronomer.