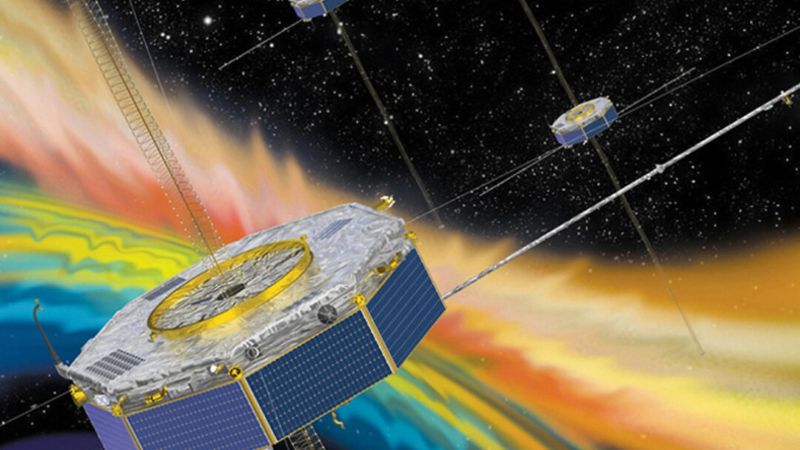 Scientists for the first time directly registered the mechanism of heating the solar wind. It turned out that the matter is in the phenomenon predicted by the Soviet theoretical physicist Lev Landau. Perhaps this discovery will help to better explore other astronomical objects, such as plasma clouds around black holes, the interstellar medium, and so on.

The achievement is described in a scientific article published in the Nature Communications magazine by a group led by Christopher Chen of Queen Mary University of London.

Recall that the solar wind is a stream of plasma emanating from the star in all directions and filling the solar system. Its speed is 400-800 kilometers per second, and the temperature – tens and hundreds of thousands of degrees.

This flow is turbulent, that is, simply speaking, turbulent. Turbulence is easy to observe, looking at how water boils and foams, flowing around an obstacle.

Astronomers have long suspected that the energy of this rapid movement heats the substance of the solar wind. But how does this happen? There was no reliable answer.

Meanwhile, the question concerns not only the solar wind.

“Plasma is by far the most common form of visible matter in the Universe, and it is often in a very dynamic and clearly chaotic state known as turbulence,” says Chen.

Plasma consists of stars, most of the interstellar and intergalactic medium, clouds of matter around black holes, and so on. In this sense, the solar wind, which can literally be “felt” by directly immersing a satellite in it, is for astronomers a key to many other objects that no spacecraft can get to in the foreseeable future.

A new discovery was made thanks to the mission of MMS. This satellite records the characteristics of the solar wind flowing around it.

Using a new method of data analysis, known as the correlation of particles and fields, the authors studied how the electric field transfers energy to an electron in the solar wind and how the amount of energy transferred depends on the electron velocity.

It turned out that the data unequivocally indicate the process opened at the tip of the pen by the great Soviet physicist: Landau attenuation.

In a nutshell, it’s about the fact that sound waves in a plasma “share” their energy with electrons flying at the same speed as the wave. Such an electron looks like a surfer holding onto a wave crest.

Landau damping was already observed in the experiment, but in much simpler situations. For the first time such a process was found in a complex turbulent flow of the solar wind.

“In this study, we first registered the processes associated with turbulent heating in natural astrophysical plasma. We also tested the new analysis technique as a tool <...> that can be used in a number of subsequent studies on various aspects of plasma behavior,” Chen concluded.