Astronomers for the first time photographed the “threads” of dark matter 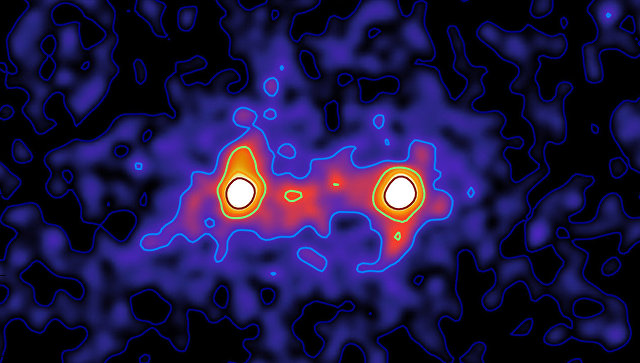 Canadian astrophysicists for the first time were able to photograph the “umbilical cord” of dark matter that connect galaxies, measure their mass and prove that the “web” of such filaments covers the entire universe, according to an article published in the journal MNRAS.

“Ten years ago, our colleagues predicted that all galaxies are inside a” web “of dark matter, the threads of which connect individual” families of stars “in it.The images we received translate this discussion from the theoretical plane into that sphere where we have something We can see and measure, “- said Michael Hudson (Michael Hudson) from the University of Waterloo (Canada).

It is believed that the universe in its structure is similar to a giant three-dimensional web. Its threads are clusters of dark matter, the so-called filaments. At the points of intersection of these filaments are dense clumps of visible matter – individual galaxies and groups of star metropolises.

In July 2012, astrophysicists were able to detect one of these webs connecting the galaxies Abell 222 and Abell 223, due to distortions in the light of distant stars that caused dark matter. Subsequently, “Hubble” received three-dimensional images of such “umbilicals”, studying galaxies in the cluster MACSJ0717 in the constellation Auriga.

Hudson and his colleague Seth Epps of the Perimeter Institute of Theoretical Physics in Waterloo (Canada) took the next step and compiled a collective “portrait” of the set of such individual threads of the “cosmic web” of the universe, studying images of super-bright galaxies obtained within the framework of the infrared Sloan digital Sky survey SDSS-III.

To search for these “umbilical cords,” scientists used an already well-developed technique – they watched how the threads of dark matter curved the light of stars of distant galaxies located behind them, and determined its size and mass by a combination of such distortions. In total, scientists managed to find and photograph about 23 thousand threads of dark matter between pairs of bright galaxies, remote from us on average 4.5 billion light years.

The combination of such “photos” of dark matter threads in their collective portrait allowed Hudson and Epps to very accurately measure their averaged mass, sizes and other properties, and use the data obtained to compose, in turn, a portrait of a separate large fragment of the “web of the universe” Several billion light years.

He, as astronomers note, on the whole coincides with what images of this “web” were obtained in the course of theoretical calculations. For example, the mass of its typical filament is 33 times larger than that of the Milky Way, and the “thickest” filaments are between galaxies separated from each other by a relatively small distance – about 100 million light-years.

Similar results, as Epps and Hudson note, not only confirm that the “web of the universe” exists, and proves that modern methods of observing galaxies allow it to be found and studied.