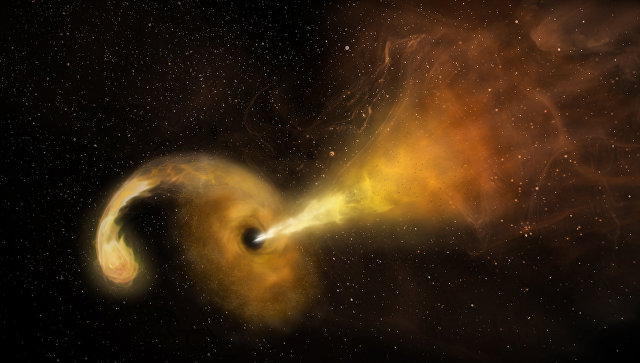 Astrophysicists for the first time completely followed the way a black hole tears a star apart, “chews” its remains and “spits” them into space.

“Most of the time, supermassive black holes have not been torn apart by anyone and are almost invisible to us.” In fact, we had a unique chance to understand what is happening in the vicinity of the black hole during such “gaps” , – said Miguel Perez-Torres, an astrophysicist from the Astrophysical Institute of Andalusia in Granada (Spain).

It is believed that at the center of most massive galaxies there is at least one supermassive black hole. The reasons for the formation of these objects are not yet completely clear. Observations of the curvature of the space around them allow us to say that a typical mass of supermassive black holes is in the range from one million to several billion solar masses.

Perez-Torres and his colleagues have been watching for decades how supermassive black holes in distant galaxies tear apart and “eat” the stars approaching them, trying to understand by their deathly “lightning” that surrounds such black holes and how they destroy the stars.

So far, the scientist notes, his team failed to catch black holes in the first phases of their “meal” when they had already begun to destroy the star, but had not yet begun to “eat” its remains and throw out “scraps” in the form of jets-narrow plasma beams , dispersed to near-light speeds.

Only in January 2005, after many years of searching, the scientist smiled luck: the infrared telescope WHT, watching the night sky of the Northern Hemisphere in the Hawaiian Islands, recorded a flash of heat in the core of the galaxy Arp 299, located in the constellation Ursa Major, at a distance of 150 million light years from the earth.

This galaxy, as scientists say, arose in the recent past as a result of the collision of two separate “star metropolises,” IC 694 and NGC 3690. Their merger led to the fact that all gas in both of these galaxies was “shaken up”, that led to the birth of thousands of new stars and the destabilization of the orbits of the old stars.

Some of the newborns and old stars, according to Perez-Torres, were in dangerous proximity to a supermassive black hole with a mass of 20 million Suns living in the center of Arp 299. One of these stars, whose mass was more than sunny four or six times higher, met its fate about 150 million years ago, in the era of dinosaurs. We saw traces of this cataclysm only 13 years ago because of the huge distance between the Milky Way and Arp 299.

In the summer of 2005, traces of the “lunch” of the black hole were observed by the VLBA radio telescope, and then it was detected by optical terrestrial telescopes and the Spitzer orbital X-ray observatory. These observations scientists continued to lead for the next ten years, until all traces of the activity of the black hole disappeared from the night sky.

Analysis of photos and data collected at this time, helped astrophysicists reveal several interesting features of the “diet” of large black holes. For example, they found that the matter of its “spittle” was dispersed to a quarter of the speed of light, confirmed that it had a narrow conical shape and calculated the position of the point where the jet was born.

In total, during the “meal”, the black hole produced more light and other forms of radiation than it produces about a million stars, similar to the Sun, for the whole lifetime or ten powerful supernovas.

These data, as astrophysicists hope, will help other scientists understand what exactly is dispersing the matter of the jet and why some of the supermassive black holes constantly throw out such plasma beams, while others, like a hole in Arp 299 or in the center of the Milky Way, behave relatively calmly.