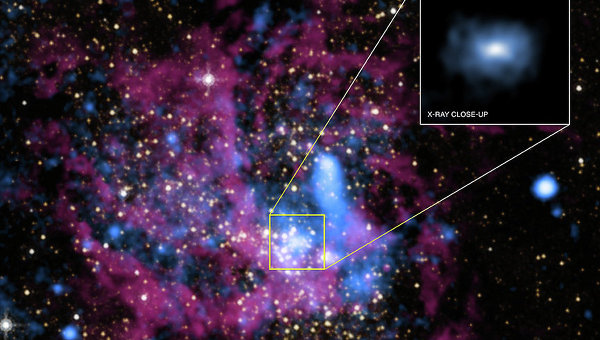 In the center of the milky Way there is a giant pit filled with hot gas, which appeared about 6 million years ago, when the black hole at the center of our Galaxy constantly chewed and spat out huge masses of matter, according to a paper accepted for publication in the Astrophysical Journal.

We played space hide and seek, trying to understand where he had gone at least half the mass of the visible matter in the milky Way. For this we turned to archival data collected by XMM-Newton telescope, and realized that this mass will not hide and that she is a red hot gas pervading almost the entire galaxy. This mist absorbs x-rays, ” says Fabrizio Nicastro (Fabrizio Nicastro) at the Harvard-Smithsonian astrophysical center in Cambridge (USA).

As the scientists explain, the majority of astronomers believes that at the center of all galaxies live supermassive black holes – objects with a mass in the millions and billions of Suns, continuously exciting and absorbing matter, part of which is chewed by the black hole and ejected in the form of jets – thin beams of plasma accelerated to near-light speeds.

In the milky Way and other galaxies this black hole is in hibernation, and jets are available. Scientists for quite a long time trying to figure out when she fell asleep and how active she was in the past, and how this activity influenced the life of stars at the galactic center and on its outskirts.

Nicastro and his colleagues unexpectedly found the answer to this question, trying to resolve another old space mystery – the question of where the missing matter in the Galaxy. The fact that astronomers for several decades trying to understand why the mass of visible matter – stars, planets, dust, gas clouds and other structures – approximately 2.5-5 times less than predicted by calculations based on the speed of the stars around the center of the milky Way.

Relatively recent observations of other galaxies, conducted with the help of the Chandra x-ray Observatory and the gamma-ray telescope Fermi showed that this missing mass may be hiding outside of the galaxy in the form of the ears, a gigantic cloud of hot gas above and below the Milky Way that are not visible in any other range of the radiation other than x-rays and gamma rays.

Team Nicastro checked if it’s actually using the data collected by the European x-ray telescope XMM-Newton. Focusing on line of oxygen in the x-ray spectrum of the interstellar medium, outstanding the presence of the hot gas, the authors have calculated its mass and density in different parts of the galaxy.

It turned out that in the center of the milky Way there is a giant bubble of rarefied hot gas, stretching for a distance of about 20 thousand light years from its center. The mass of this gas and other accumulations of hot matter above and below the galaxy, according to astronomers, just enough to cover the difference between observations and calculations.

His parents, apparently, was a supermassive black hole Sgr A* at the center of our Galaxy – if she was active in the past, it threw huge masses of hot gas, moving at a speed of about thousand kilometres per second. These emissions have cleared the parts of the milky Way, through which they flew, no major accumulations of cold and more visible to us of the matter.

This bubble, according to calculations of scientists and the observation of young stars in the vicinity of the center of the Galaxy, formed some 6 million years ago, when the black hole ate all their supplies of matter and have gone into hibernation after 8 million years of gluttony. Similarly, as astrophysicists believe that can stop the work of distant quasars, supermassive black active in distant galaxies.