Astronomers found out why Mars had oceans of warm water 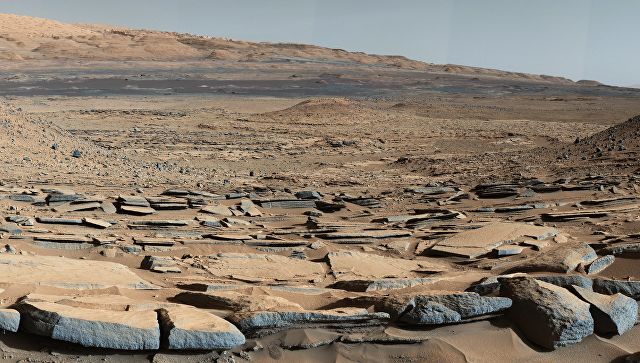 Oceans of warm water existed on Mars due to the periodic emissions of methane its volcanoes, which rise the greenhouse effect and made Mars warm enough for the existence of liquid water on its surface.

“Young Mars was unique in the sense that it was the only planet besides Earth, which we can with certainty say that it, at least for a short time, had all the conditions for the emergence and prosperity of life. If we understand how it looked and how was Mars in the past, we will be able to understand how you can find the same planets outside the Solar system,” said Robin Wordsworth (Wordsworth Robin) from Stanford University (USA).

Today almost no one doubts that on the surface of Mars in the distant past, the 3.8-3.5 billion years ago, there was an ocean of liquid water. The problem is that scientists still have not come to the same conclusion, how it was formed, as it stayed liquid and how it dissipates in space.

Part of astronomers suggests that the Martian atmosphere was thick enough and warm in order to maintain the water in liquid state for a long time, and other planetary scientists believe that the oceans appeared on Mars only for a very short time, when his supply of ice melt or volcanic eruptions, or meteorite impact. In favor of all these theories has its own evidence, and so scientists continue to debate to this day.

Wordsworth and his colleagues, including a number of Russian scientists from Moscow state University, Institute of atmospheric physics RAS in Moscow and Tomsk University, added to the number of these hypotheses, a new theory by creating a computer model of the atmosphere of early Mars. In this atmosphere, as scientists suggested, was to present not only carbon dioxide, nitrogen and hydrogen, but also another substance that is already found on Mars – methane.

“You can increase the amount of CO2 in the atmosphere of Mars hundreds of times and still Mars will remain too cold to water at least melted. Consequently, Mars had to be something that intensified the greenhouse effect,” explains Wordsworth.

As noted scientist, Mars has almost no oxygen, so methane produced in the subsoil as a result of heating certain rocks and into the atmosphere along with volcanic eruptions that had accumulated in the past in large enough quantities. Russian and American planetary scientists checked whether it was enough to at least temporarily melt the oceans of Mars.

Their calculations revealed an unexpected response. It turned out that the addition of even small amounts of methane in the extremely sparse atmosphere of carbon dioxide dramatically increased the greenhouse effect, raising temperature by tens of degrees Kelvin with increasing CH4 concentration of only one percent.

For example, if the atmosphere of the red planet was as dense in the past, as the air shell of the Earth, the surface temperature of Mars was the same as on Earth today, with only 2-10% methane in the air of Mars, despite the fact that the Sun was one third dimmer current approximately four billion years ago.

This “greenhouse blanket” was supposed to last for several hundred million years during the period of activity of the volcanoes of Mars, which, in principle, was sufficient for the origin of life. Traces of this process, as scientists believe, can be found on the surface of Mars, in the form of deposits of clathrates and other minerals containing methane, which in the future it will be possible to detect using Rovers or after landing humans on the red planet.