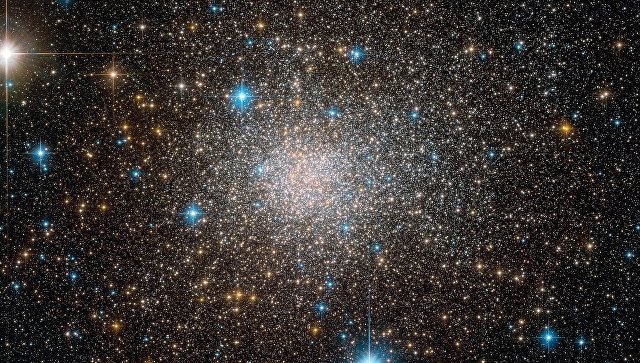 European astronomers have discovered in one of the globular clusters on the outskirts of the milky Way stars, which are composed of matter of the dead bodies of the so-called third populations of the first stars of the Universe, according to a paper published in the Astrophysical Journal.

Some of the features that cluster of stars, Terzan 5, recall those things that we see in the giant molecular clouds where violently born a new star in the galaxies, which existed at the dawn of the Universe. It seems that Terzan 5 is a connecting link between the local and distant Universe, and this cluster is the last living witness to the formation of the galactic core, said Francesco Ferrara (Francesco Ferraro) from the University of Bologna (Italy).

Globular clusters are a close family of several tens or hundreds of thousands of stars that exist on the outskirts of galaxies. It is believed that they originated in the distant past that supported a large number of white dwarfs and neutron stars within them. The age of the oldest of them, judging by separate bodies in such clusters, close to the time of the Big Bang, or even exceeds it.

Ferraro and his colleagues for almost five years studying globular clusters, trying to determine their age and the average age of the most young and old stars within them. Such data are necessary for scientists to understand as the birthplace of our Galaxy and how did it spiral arms.

In one of these clusters, Terzan 5, located in constellation Sagittarius at 19 thousand light-years from Earth, the typical age of the stars was highly unusual. This globular cluster, scientists tell us, as if composed of two halves. Stars in one of them were relatively young – their average age does not exceed 4.5 billion years old and the other very elderly – their age was close to the mark of 12 billion years.

This discovery surprised scientists, as they believed that all stars in globular clusters were born around the same time in the distant past, after which star formation has faded and the lights began to fade gradually, becoming a supernova, neutron stars and white dwarfs.

The launch of the second wave of star formation, according to astronomers, was possible only in the case that the first stars in Terzan 5 was a the firstborn of the Universe – the giant luminaries of the so-called third population, which weighed hundreds of times more than the Sun and did not contain elements heavier than hydrogen and helium. The total mass of these bodies, according to scientists, have to exceed the mass of the Sun 100 million times.

This mass and the history of the formation, said Ferraro, makes Terzan 5 with the other part of the milky Way, the so – called belgam, a giant spherical cluster of stars at its centre, which also stars were born in waves. Therefore, this cluster of stars, as the researchers claim, can be considered the last aspiciam epoch of galaxy formation, which has survived to our times.