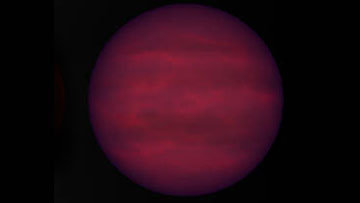 “The opening of the superhigh speed rotation of the object J1122+25 poses new challenges for the theoretical models explaining the nature of these celestial bodies and how their magnetic field. Radiospace and rotation J1122+25 things to tell us about the birth of magnetic fields in brown dwarfs, and how this knowledge can be used to study young giant planets,” said Matthew Ruth (Matthew Route) from the University of Pennsylvania in Philadelphia (USA).

Ruth and his colleague Alexander Wolman (Alexander Wolszczan) made this discovery thanks to the Arecibo radio telescope, the largest radiotrance the world with a diameter of 300 meters, which is now threatened by closure due to “optimization” costs the National science Foundation (NSF).

Scholars interested in the so-called brown dwarfs – objects that occupy an intermediate position between small stars and giant planets, in the depths of which fusion reactions are unable to begin because of their insufficiently high mass. They glow weakly in the infrared range due to the residual heat from their birth, and gravitational compression of their interiors.

Studying such “failed light”, found by the WISE telescope during the “cold” part of its mission, Ruth and Volman met a kind dwarf”pulsar” J1122+25, invisible to the human eye or optical telescopes, but is well marked by regular outbursts of radio emission which it produces as a result of its rotation.

It is located in the constellation Leo, at a distance of 55 light years from Earth, that is relatively close to our planet. This brown dwarf has a sufficiently large weight – it is 35 times heavier than Jupiter, and its surface temperature is thousands of degrees Kelvin (726 degrees Celsius).

Analysis of these outbreaks showed that this paleoplanet-Prosveta rotates at extremely high speed – one revolution J1122+25 commits or 17, or 34, or 51 minutes. This means that the object is spinning on its axis several times or even orders of magnitude faster than all other known brown dwarfs.

Ultra-fast speed of this dwarf means that it has a powerful magnetic field, whose nature and unusual fluctuations in the direction of strengthening and weakening of scientists have yet to explain. In addition, if the mass of the dwarf is really big, then astrophysicists will additionally understand how he’s not being torn apart at such high speed.

The study of the mysteries of this “ula-Dynamo”, according to planetary scientists, help us reveal the mysteries of the birth of the giant planets, which act as “sculptors” of the star systems and affect their device practically from the first moments of their birth.