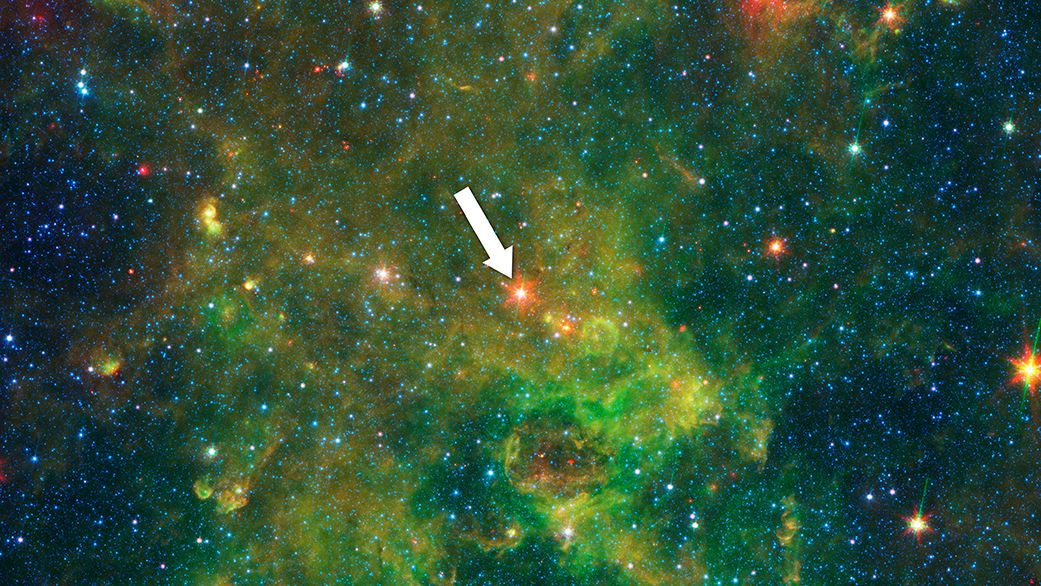 For many years, astronomers can’t solve a riddle related to one massive star in the milky way that seems “young”, although it shows a number of features characteristic of more Mature stars.

Initially, the researchers have classified this star as a star “coming of age”, maybe a red giant. However, in a new study conducted by astronomers from NASA, headed by astrochemical Martin Cordilera from the center of Goddard, NASA, USA, shows that the star actually represents a protostar, or star-baby”, wrapped in a cocoon of gas and dust, which is its formation.

Originally on the “Mature” age of the star IRAS 19312 1950, scientists pointed out the features of the radio spectra of this star, known as masers. In astronomy, masers are observed when molecules of certain gases intensively excited and emit in a narrow band of radio frequencies. Masers silicon monoxide (SiO) and hydroxyl (OH), found for this star, a characteristic very rare exception for the stars is quite large in age, so they almost convinced scientists “adulthood” star of IRAS 19312 1950с.

However, in the new study, Cordiner and his colleagues by performing additional observations of IRAS 19312 stars of the 1950s with the help of space Observatory “Herschel”, ESA and analyzing archival data of the observations carried out previously at the space telescope NASA “Spitzer, found that the star is likely to be one of the primary stages of evolution. This is evidenced by several facts discovered in the course of the observations. First, researchers have found that the object is about 20,000 times brighter than previously thought, but its observed brightness is reduced due to the surrounding dense clouds of particles of water and carbon dioxide ice, absorbing light. Second, this cloud of ice particles is compressed, which is typical for star-forming instead of expand as it would in the case of old stars. The weight of the shell of gas and dust around the star IRAS 19312 1950 is of the order of 500-700 solar masses, it is acceptable for young stars, but could not get an explanation, if we assume that the shell waste into space layers deep proanalizirovana stars.

Thus a team of Cordiner concludes that the object IRAS 19312 1950 is a protostar, however an explanation for the unusual masers observed in this star, the authors have not yet found.