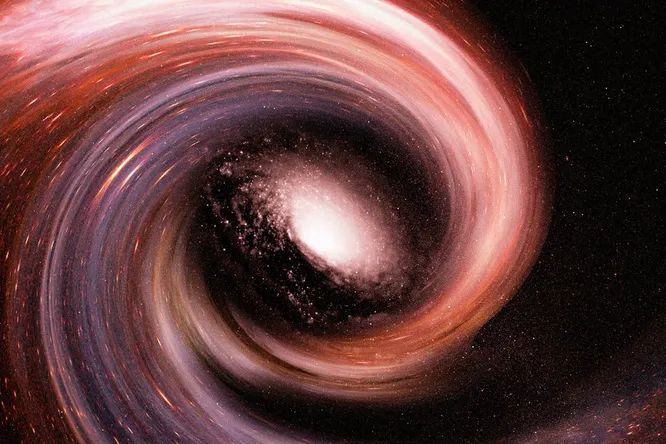 The universe is full of galaxy clusters, but Abell 2261 is a mansion. At its center, where one of the largest supermassive black holes in the universe should be located, astronomers have not been able to find any trace of this object.

Black holes are colossal space objects that simply cannot disappear without a trace. But the fact remains: the supermassive black hole is simply absent in its usual place!

The new work made the absence of a black hole in its usual place even more mysterious: if a supermassive black hole somehow flew out into space, then it should have left at least some traces in its path. But the scientists found nothing in the material surrounding the galactic center.

Clusters of galaxies are the largest known gravitationally bound structures in the universe. These are usually groups of hundreds to thousands of galaxies connected by one huge, abnormally bright galaxy in or near the center, known as the brightest cluster galaxy (BCG).

But even among BCG, Abell 2261 stands out. Its full name is A2261-BCG and it is located about 2.7 billion light years away. Its diameter is about a million light years – up to 10 times the diameter of the Milky Way – and it has a huge core 10,000 light years across. It is the largest galactic nucleus known to science.

Based on the mass of the galaxy, which correlates with the size of the black hole, there must be an absolute monster in its core: a black hole 3-100 billion times the mass of the Sun, making it one of the largest black holes in the universe. By comparison, the Milky Way’s supermassive black hole reaches 4 million solar masses.

A massive emission of radiation is expected from an active supermassive black hole as it heats the material around it to incredible temperatures. But this radiation is absent: the core of A2261-BCG is filled with diffuse fog and bright starlight. Various instruments, including the Chandra X-ray Observatory, the Very Large Matrix and the Hubble Space Telescope, have failed to detect a single hint of a black hole at the center of A2261-BCG.

So a team of astronomers led by Kayhan Gultakin from the University of Michigan at Ann Arbor returned to Chandra for a series of deeper observations based on the hypothesis that the supermassive black hole flew off somewhere into outer space.

It’s not such a wild idea. BCGs in galactic clusters are expected to merge with other galaxies over time and grow even larger. When this happens, the supermassive black holes at the center of these merging galaxies will also merge, slowly approaching each other, before merging into one large black hole.

The problem is also that, according to the supermassive black hole fusion model, this very fusion cannot happen at all. The reason is that as their orbit decreases, so does the area of ​​space into which they can transfer energy. By the time the black holes are one parsec apart (about 3.2 light years), theoretically, this region of space will no longer be large enough to support further orbital decay, so they will remain in a stable double orbit for billions years. This is called the “last parsec problem”.