Astronomers have discovered a cosmic storm 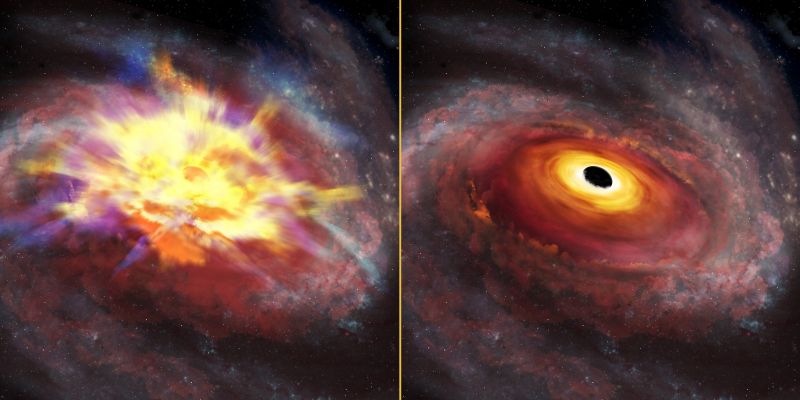 Researchers using the Gemini North telescope in the Hawaiian Islands of Maunakea, discovered the most energetic stream from the quasar. This stream, which moves at a speed of almost 13% of the speed of light, carries enough energy to dramatically affect the formation of stars throughout the galaxy. The extragalactic storm was hidden from view for 15 years, after which it was presented by innovative computer modeling and new data from the Gemini international observatory.

The most energetic wind flow from the quasar was discovered by a group of astronomers using observations from the Gemini International Observatory, the NOIRLab NSF program. This powerful outflow moves to its galaxy at a speed of almost 13% of the speed of light and comes from a quasar known as SDSS J135246.37 + 423923.5, which is located about 60 billion light-years from Earth.

“While high-speed winds were previously observed in quasars, they were thin and relatively small in mass,” explains Sarah Gallagher, an astronomer from Western University (Canada) who supervised the observations of Gemini. “The outflow from this quasar, in comparison with others, carries a huge amount of mass at incredible speeds. This wind is incredibly strong, and we don’t know how a quasar can launch something so significant. ”

This result is published in the Astrophysical Journal, and the quasar itself is now a record for the energy of the wind flow, measured to date.

Despite the massive and energetic outflow, its discovery was impossible for 15 years before a combination of Gemini data and an innovative computer simulation method allowed us to study it in detail.

“We were shocked – this is not a new quasar, but no one knew about its features until the team got spectra with Gemini,” explains Karen Leyley, an astronomer at the University of Oklahoma, who was one of the scientific leaders of this study. “These objects were too complex to study before our team developed its own methodology and collected the data we needed.”

Quasars, also known as quasistellar objects, are a type of unusually luminous astrophysical object located in the centers of massive galaxies. Consisting of a supermassive black hole surrounded by a luminous disk of gas, quasars can eclipse all the stars in their host galaxy and can control winds powerful enough to affect entire galaxies.

“Some quasar-driven winds have enough energy to sweep away the galactic material needed to form stars and thus suppress star formation,” explains Joseph Choi, a graduate student at the University of Oklahoma and the first author of a scientific article on this discovery. “We studied a particularly windy quasar, SDSS J135246.37 + 423923.5, the expiration of which is so great that it is difficult to detect the signature of the quasar itself at visible wavelengths.”

Despite the obstacle, the team was able to get a clear view of the quasar with the Gemini Infrared Spectrograph (GNIRS) at Gemini North for observation at infrared wavelengths. Using a combination of high-quality spectra from Gemini and an innovative approach to computer modeling, astronomers have revealed the nature of the outflow from the object – which, oddly enough, turned out to be more energetic than any of the outflows from the quasar previously measured.

The opening of the team raises important questions, and also suggests that other similar quasars can be found.

“This extraordinary discovery was made possible by resources provided by the Gemini International Observatory; this discovery opens up new windows and opportunities for further exploration of the universe in the coming years, ”said Martin Still, director of the astronomical program of the National Science Foundation, which finances the US Gemini Observatory as part of international cooperation. “The Gemini Observatory continues to expand our knowledge of the Universe by providing the international scientific community with advanced access to telescope tools and facilities.”