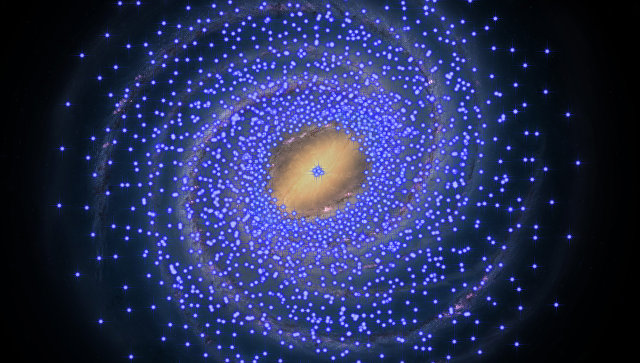 In the vicinity of the center of our Galaxy there is a gigantic desert with a length of 8 thousand light years, where virtually no young stars, and this discovery will require a revision of all theories about the life of the milky Way, scientists have found, published an article in the journal MNRAS.

The results of our observations show that this giant region of space the stars are not generated hundreds of millions of years. The composition and nature of open in the desert of the Cepheids help us to understand how varied and evolved Galaxy in the past — said Giuseppe Bono (Giuseppe Bono) from the Astrophysical Observatory of Rome (Italy).

Scientists managed to take pictures of stars the other side of the Galaxy
Bono and his counterparts from Japan and South Africa made this unexpected discovery, watching the so-called Cepheids, unusual variable star, using ground-based Sino-South African telescope, which is located in South Africa.

Cepheids interesting to scientists because of their brightness gradually and smoothly increases and decreases as a result of internal processes in the subsoil. The frequency and strength of these pulsations depend on the absolute brightness of a star, which allows astronomers to use them to measure distances in space, and to explore how far away from us the different parts of the galaxy.

The number of known Cepheids in the Central part of the Galaxy and in its distant parts are relatively small, which encourages scientists to actively seek similar stars in the hope to understand how the core of the milky Way and its most distant suburbs. It is difficult to do because of the thick blankets of dust and gas surrounding these regions of the milky Way.

One of these searches, which were conducted by the authors, has led to unexpected results – it turned out that the number of Cepheids in the Central part of the Galaxy was very small. All the scientists managed to find about three dozen such young stars in a so-called jumper, the most dense region in the center of the milky Way. The share of the Cepheids in the population of this part of the galaxy and its immediate surroundings was significantly lower than the ratio of such pulsating normal stars on the outskirts of the milky Way.

What does it mean? As the scientists explain, this suggests that a huge portion of the galaxy, covering the regions around the center of the milky Way in 8 thousand light years from it, is a space of the desert, where new stars are not generated hundreds of millions of years. This discovery contradicts the idea that the bridge and other parts of the center of galaxies are the most active factories of stars, where new luminaries are formed faster than in the suburbs.

Similar results, as noted by the scientists themselves, consistent with radio telescopes, who also pointed out the unusual lack of young stars in the vicinity of the so-called inner disk of the Galaxy. Apparently, stars are born in the milky Way, not the way we envisioned earlier, and the Galaxy itself is not developing as we thought before, make Bono and his colleagues.