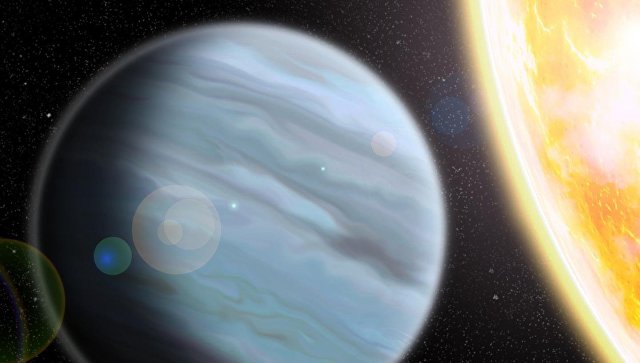 Astronomers have discovered in the constellation of Sextant an extremely unusual exoplanet, consisting of matter that can compete with ease with polystyrene, says an article published in the Astronomical Journal.

“This planet literally” swelled up “- it weighs about five times less than Jupiter, but it is 40% bigger than it, its density is approximately equal to that of foam, which makes its atmosphere a record high, making it ideal Polygon to test our methods of exploring exoplanets, “- said Joshua Pepper (Joshua Pepper) from the University of Lehi County in Bethlehem (USA).

Over the past ten years, astronomers have discovered thousands of planets outside the solar system, some of which turned out to be similar in size to Earth, and others to smaller or larger copies of Jupiter. Now, planetologists are actively working on studying their atmosphere to assess whether life can exist on them, and by revealing the history of formation.

Great progress in this direction was achieved in the study of “hot Jupiters” – the largest and most convenient for studying the planets outside the solar system. Their hot atmosphere turned out to be similar in composition to the gas shells of Jupiter and Saturn, mainly consisting of hydrogen, helium and hydrocarbons, and in their skies astronomers discovered exotic glass and lead clouds and rains from precious stones.

Pepper and his colleagues discovered another exotic “hot Jupiter”, watching the stars in the constellation of Sextant with the help of two automatic telescopes in the US and South Africa, built specifically to search the planets for very bright luminaries in the night sky of the southern hemisphere of the Earth.

Watching the star HD 93396, the elderly analogue of the Sun 320 light years away, almost exhausted its star fuel reserves, scientists noticed characteristic drops in the brightness of this luminary, usually appearing at the moment when the planet passes through the disk of the star and blocks its light From observers on Earth.

Initially, planetologists assumed that they were dealing with a large gas giant or even a brown dwarf, but further observations of the planet showed that the exoplanet KELT-11b discovered by them is relatively small, yet unique and extremely unusual object.

The reason for this “inflation”, according to scientists, is that this planet is unusually close to the star HD 93396, which releases unusually a lot of energy in the last stages of its transformation into a red giant. It makes one revolution around the star in five incomplete days and is about five times closer to it than Mercury to the Sun. Thanks to this, the atmosphere of KELT-11b is heated to a temperature of 1400 degrees Kelvin, which could cause it to expand to such a large size.

The KELT-11b’s uneasy and large atmosphere, as the scientists note, makes it particularly interesting for revealing the secrets of the chemical composition of giant planets, as well as testing new techniques for searching for life traces and assessing the habitation of earth-like planets whose atmospheres are hundreds of times less convenient to study at the expense of Lesser thickness and less homogeneity of their composition.