Astronomers have discovered a potential “star of aliens” 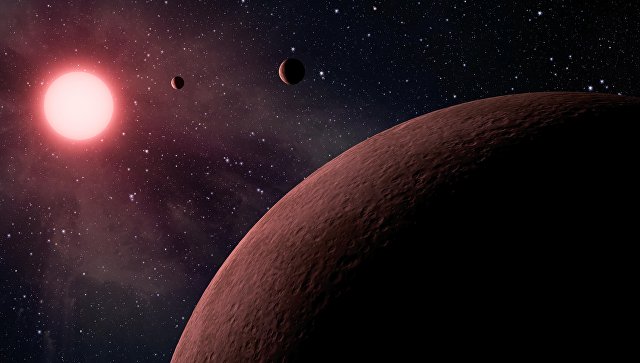 Planetologists from the project Red Dot recorded unusual periodic radio signals originating from the star GJ 447, unlike the natural sources of radio waves, astronomer Abel Mendes wrote in his blog on the website of the University of Puerto Rico.

“Our SETI colleagues are notified of this signal, we have never seen satellites or other objects emit such unusual radio flashes.Of course, the Arecibo viewing angle is very wide and the telescope could catch some other signal generated by some man-made object On the Earth’s orbit, “writes Mendez.

For more than half a century, astronomers from the SETI Extraterrestrial Intelligence Research Institute in the United States and their colleagues around the world are trying to find life outside Earth listening to radio signals coming from various parts of the galaxy. While reasonable or unreasonable life was not found, this task, according to NASA and SETI representatives, can be solved very soon, in the next 10-20 years.

For all 56 years of work, SETI astronomers have not been able to find unambiguous traces of extraterrestrial civilizations for one small and contradictory exception. The so-called “signal Wow!”, Caught by the radio telescope “Big Ear” in 1977, claims this role. In subsequent years, astronomers could not re-find the source of this signal in the constellation Sagittarius, which made scientists consider it a reflection of radio waves from the Earth from pieces of space debris.

Mendes and his colleagues accidentally discovered another unusual surge of radio waves that could displace the “Wow!” Signal. From the pedestal of potential traces of “alien” civilizations, when they pursued very different scientific goals.

So the artist imagined a third type of galactic civilization of Kardashev, building the Dyson sphere

As the Puerto Rican astronomer tells us, he and his team are participating in the Red Dot project, an initiative to search for planets from red dwarfs, like the newly discovered Earth “twins” at TRAPPIST-1. Observing changes in the glow of stars in the immediate vicinity of the Earth, astronomers try to find traces of planets passing through their disk, and simultaneously study their physical properties and chemical composition.

Radio telescopes like Arecibo play an indirect role in such observations – they are needed by scientists not to search for potentially inhabited planets, but for observing unusual radio flares on the surface of red dwarfs, not caused by bursts of X-rays and ultraviolet. These outbreaks can be associated with episodes of interaction between the magnetic fields of planets and luminaries, and their study will help planetary scientists understand whether the restless nature of these stars prevents the emergence of life on such analogues of the Earth.

Analyzing the data gathered during observations of seven such stars using a 300-meter “Arecibo” dish in May of this year, Mendes and his colleagues noticed something unusual – a strange repeating radio signal that originated from the GJ 447 star and was not similar to any one “Terrestrial” type of radio interference or radio waves.

Mysterious flashing of the alien star in the constellation Cygnus can be caused by a giant planet, similar to Saturn

As scientists now suppose, the source of this signal could be either some flashes on the surface of GJ 447, or some processes in the open space on the way between the red dwarf and the Earth.

Today, Mendes and his colleagues conducted repeated observations of GJ 447 and hope that they were able to collect enough data to either prove the extraterrestrial nature of the signal, or to confirm that it was generated by satellites in high orbit or some other man-made objects in the near-Earth space . As an astronomer jokes, he has already prepared a pina colada, a traditional Caribbean cocktail, in case the signal really turns out to be of extraterrestrial origin.